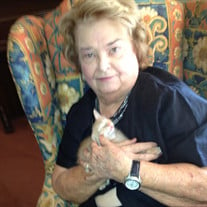 Georgia Hensley, the former Georgia Gail Price, passed away November 16, 2016 in Shawnee, Oklahoma. Georgia grew up in Pauls Valley, the daughter of Charley and Katherine Price. She attended Lee Grade School and Pauls Valley Junior High. She attended the boarding schools Miss Hockaday’s in Dallas, Texas, Visitation Academy in St. Louis, Missouri; and she graduated from North Phoenix High in Phoenix, Arizona. She was a founding member of The Grey Ladies, an auxiliary of the State Hospital. She was a National Delegate to the Presbyterian Women Convention, Chairman of the Garvin County Red Cross fund campaign, and owned and managed farms in Garvin County. She worked for Multi-County Library System stationed in the Pauls Valley Library and was bookmobile librarian. Georgia graduated from East Central University suma cum lauda with a degree in English and Spanish. In 1964, she married James Burl Hensley of Wynnewood, Oklahoma. She received a Master’s degree at Oklahoma State University and was an English instructor at Oklahoma State University for seven years. She is a resident of Shawnee since 1971, and she was active in the First Presbyterian Church, leading the Women’s Circle Bible study for eight years. She is a member and past President of Chapter BB of P.E.O., and Hawthorne Club; and was a business manager of Hensley Veterinary Hospital for twenty years. Georgia, in later years, has been occupied with investments and stock trading, active in the First Presbyterian Church in Wewoka where she taught the adult Sunday school class for eight years. Georgia is survived by her husband of 52 years, Dr. James Burl Hensley of the Shawnee home; Cousins W.A. Wills of Colorado Springs, Colorado; Marne Wills Quellar of Denver, Colorado; Dr. Annie Wills of Weatherford, Texas; her very dear friend Shannon Humphrey of Macomb, Oklahoma; her very dear friend Sandra Farris of Bethel Acres in Shawnee, Oklahoma; her church family of Wewoka First Presbyterian Church in Wewoka, Oklahoma; and her beloved cat, Jack. Funeral services are scheduled for Monday, November 21, 2016 at 2:00 p.m. In the Wooster Funeral Home Chapel with Rev. Bill Simpson officiating. Interment will be in the Mt. Olivet Cemetery under the direction of Wooster Funeral Home. You may send a condolence to the family at www.woosterfuneralhomes.com. In Lieu of flowers the family would prefer donations be made to the Oklahoma Medical Research Foundation for Diabetes and Kidney Research at 825 NE 13th St, Oklahoma, City , OK 73104.

The family of Georgia Hensley created this Life Tributes page to make it easy to share your memories.