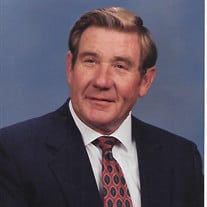 George Dale, Elmore City, beloved husband, dad, granddaddy, great-granddaddy, and brother, left this world peacefully and met his Lord and Savior Jesus Christ on Friday, November 6, 2020. He valiantly fought cancer for eight years. Spouse: George is survived by his wife of 70 years, (Helen) Maxine Dale, who was the love of his life. In fact, long before they met, their dads, JW Dale and Roy Roady met coincidentally at Dale’s grocery store in Katie with JW (George’s dad) saying to Roy who was holding Maxine, “I have a baby boy at home just her (Maxine’s) age.” It was God’s plan that later brought them together. Daughters: He is survived by three daughters and their spouses: Kim Wright, Elmore City; Ginger Higginbotham, Clute, Texas, and Pam Deering, Norman. Parents: George was born on January 8, 1932 in Davis, Oklahoma to James Wilburn (JW) and Lassie Dee (Jones) Dale both deceased. Brothers: George is survived by one brother Jimmy Dale, Davis, Oklahoma. His brothers, Wilburn, Albert, Fred, and Raymond are deceased. Sisters: George is survived by one sister, Lauralee Byrd, Angel Fire, New Mexico. His sisters who are deceased are Hettie, Bonnie, Olene, Winnie, and Edith and Ethel, twin sisters. Grandchildren: Ericka Lowery, Decatur, Texas; Jessica Narvaez, Pearland, Texas; Daniel Deering, Norman, Oklahoma; and Michael Wright, Elmore City. Great-Grandchildren: Liv, Zoe, and Luke Lowery, Decatur, Texas; Isabella, Olivia and Alexandra (Ali) Narvaez, Pearland, Texas; Adelyn and Callie Deering, Norman, Oklahoma; and McKenna and Madison Wright, Elmore City, Oklahoma. Childhood Days: George grew up in Davis, Oklahoma as the next to the youngest of 13 children. He attended school in Davis, but moved to Elmore City to attend high school and work. He met Maxine Roady in high school and they became high school sweethearts, graduating in 1950. Marriage: George and Maxine fell in love and were married on July 23, 1950 in Katie, Oklahoma. Career: George worked hard every day. He began his career as a butcher in Oklahoma City at the Public Market working there for a year before he came back to Elmore City to work in the grocery store. He loved going to work. George built Dale’s Grocery Store in Elmore City and owned it for 23 years. He was a humble man, helping many families put food on their tables without charge in hard times. George sold the store and started R&D Oil Company with Roy Roady (Maxine’s dad). They owned and operated the company together until Roy’s death on June 1, 2001. He continued operating the company until he sold the company. George also enjoyed his cattle and working the land with annual pecan crops. George really never retired from working as he managed as much as he could from home before his health would not permit him to. Church: George was a faithful member of the First Baptist Church of Elmore City, serving as a deacon for 47 years. Maxine taught pre-school children in Sunday School for 65 years. They raised their girls in the church. The new church building resides on land donated to the church by George and Maxine. Hobbies: Outside of working, George enjoyed hunting quail and pheasant. He raised bird dogs and hunted with them for years. Fishing was also fun for him and the family whether it was at the lake or on local ponds. Traveling together with his family holds many memories. Highlights of George’s life: George put God first in his life. He was a role model for his family and others. He treasured his wife, Maxine, his girls, his grandchildren and great-grandchildren. Family was his focus and he worked hard to ensure that his family had what they needed. He took care of Maxine every day of her life. He loved deeply. He was selfless, humble and kind. George was a quiet and generous man. He did so much for others and would not take credit for anything. Most important things that he taught others about life: George was a Christian man and lived his life that way. He led others to Christ by his example and witness. George lived in the word, the Bible, every day. He prayed unceasingly. He prayed at every meal, no matter where he was—at home or in restaurants. He talked to strangers about church and their salvation. Differences that he would like to have made or things that he wanted to live to see: George would always tell his family to “take care of the babies”. Until the end, he always had unfinished business on his mind. He would want to have lived to see his whole family become Christians so that he could see them in heaven. He lived by faith and wanted his family to do the same. Matthew 5:16 -- Let your light so shine before men, that they may see your good works, and glorify your Father which is in heaven.

The family of George Dale created this Life Tributes page to make it easy to share your memories.