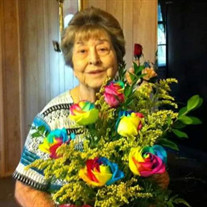 GENEVA FAYE VANBUSKIRK Geneva Faye VanBuskirk of Elmore City, Oklahoma was born to Edwin Elzie and Susie Viola (Bliss) Wardwell Vines on September 14, 1940 in Erick, Oklahoma and passed from this life on February 17, 2015 in Elmore City, Oklahoma at the age of 74 years. Geneva was a standout basketball guard throughout her school years. She made her home in Elmore City, Oklahoma. Geneva worked for many years at S.O.R.C. in Pauls Valley, Oklahoma as building supervisor. In her spare time she enjoyed shopping, cooking, sewing, going to the lake and playing bingo. The highlights of her life were her children, grandchildren, great-grandchildren and her pets, Snowball and Scooter. The most important things she taught others about life were to love the Lord, be independent, and stand on your own, be kind and respectful to one another. Mrs.VanBuskirk is survived by: Son: Keith VanBuskirk and wife Patsy of Elmore City, Oklahoma Daughter: Terri Lynn Farris and husband Tommy of Elmore City, Oklahoma Daughter-in-law: Vicki VanBuskirk of Elmore City, Oklahoma Brothers: Robert Franklin Wardwell and wife Alma of Stagecoach, Nevada Christopher Vines of Perryton, Texas Sisters: Delores Sue McGuire and husband Willis of Whitesboro, Texas Nelda Ann Taylor of Guymon, Oklahoma 12 grandchildren and 21 great-grandchildren Mrs. Vanburkirk was preceded in death by: Parents: Edwin & Susie Vines Daughter: Deborah Satterfield Son: Johnny LenderVanbuskirk, Jr. Sister In-Law: Helen Vines Funeral services are scheduled for Friday, February 20, 2015 at 10:00 a.m. in the Elmore City First Baptist Church with Sister Ellen Abshire officiating. Interment will be in the Elmore City Cemetery under the direction of Wooster Funeral Home. You may send a condolence to the family at www.woosterfuneralhomes.com.

The family of Geneva Faye VanBuskirk created this Life Tributes page to make it easy to share your memories.