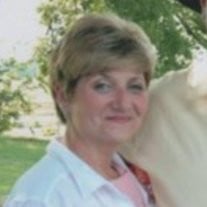 GAYLA DEE ROSE Gayla Dee Rose of Wynnewood, Oklahoma was born to Raymond Henagar and Jonnie Sue (Melton) Henagar on July 15, 1961 in Ada, OK and passed from this life on November 29, 2013 in Ardmore, Oklahoma at the age of 52 years. Gayla grew up and attended school in Stratford, OK. On October 23, 1980 she married Billy Dean Rose in Ada, OK. After years of suffering with severe back pain following a fall. She had difficulty walking, standing and sitting. She was also diagnosed with Crohn’s disease which made life even more difficult for her. Gayla’s family celebrates her new life. She can now walk, ride a horse again and is pain free for the first time in several years. She will be remembered for her expertise in baking and cooking. Often creating her own recipes from scratch, she could’ve have written a cook book herself. Gayla was also blessed with a loving and devoted husband who kept to their wedding vows to love in sickness and in health. For many years, Billy cooked, cleaned, and bathed Gayla. He also escorted her to doctor appointments and hospitals. He sat right by her side through days and nights. Billy was also there to release to her heavenly Father, trusting that she would be in eternal arms. Gayla was unaware of her surroundings during her last hospitalization, but would have been proud of Jeff and Michael supporting their Dad. They helped with farm chores, and took great burdens off of him while he stayed with Gayla. The boys have suffered a great loss. A mother cannot be replaced, she loved her boys above all else. Mrs. Rose is survived by: Her husband: Billy Rose of the home Parents: Raymond Henagar and Jonnie Henagar Sons: Jeff Rose and wife Nicole of Blanchard, OK Michael Rose and fiancée Melanie of Pauls Valley, OK Daughter: Crystal Pietroforte and husband Louie of Moore, OK Brother: Cliff Henagar of Stratford, OK Sister: Kim Wade and husband Tony of Ada, OK Sister-in-law: Nila and Mother-in-law Audrey Rose Grandchildren: McKenna, Madison, Connor, Lane, Hadley Dee, Leah, Savannah and Sydnie Mrs. Rose was preceded in death by: Father-in-law Claude Rose Funeral services are scheduled for Tuesday, December 3, 2013 at 2:00 p.m. in the Hillcrest Baptist Church in Wynnewood, Oklahoma with Pastor Mike Muse officiating. Interment will be in the Elmore City Cemetery under the directin of Wooster Funeral Home. You may send a condolence to the family at www.woosterfuneralhomes.com.

GAYLA DEE ROSE Gayla Dee Rose of Wynnewood, Oklahoma was born to Raymond Henagar and Jonnie Sue (Melton) Henagar on July 15, 1961 in Ada, OK and passed from this life on November 29, 2013 in Ardmore, Oklahoma at the age of 52 years. Gayla grew... View Obituary & Service Information

The family of Gayla D. Rose created this Life Tributes page to make it easy to share your memories.