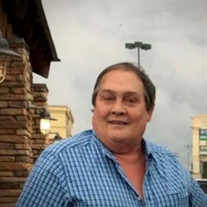 Frank Joseph Loriss Jr. of Elmore City, OK was born October 24, 1955, to Frank Sr. and Dorothy Bronis Loriss in Chicago, Illinois and passed from this life on October 1, 2021, in Oklahoma City. Frank spent a large part of his childhood in Chicago. His first job was at Meca’s Italian Restaurant where he was a cook at the young age of 12. He often spoke very fondly of this time. His family moved to St. Petersburg, Florida when he was 14 and there he met the love of his life Judith Shultz. The couple was married in St. Petersburg Florida at his parents’ home on June 1, 1974.They shared 48 years of marriage. Like many others the oil field began calling and their life in Oklahoma began. Frank and Judith put down roots in Katie Ok where they raised two children, Jason, and Shelly. Frank was always a hard worker with a great mind for business. He was a mechanical contractor doing air conditioning, heating, and refrigeration. This all served him and others well when he established Loriss Refrigeration. He worked hard to support his family and did all the good he could for his customers. He made many friends during his years of serving his community and surrounding areas. He held very closely to his heart the time he spent during the last years of his life raising his grandson Skyler. They enjoyed many adventures. Frank will be missed by all that had the pleasure of meeting or spending time with him. Frank will remain forever in the hearts of his surviving family. Mother: Dorothy Loriss of Grand Junction. CO Wife: Judith Loriss of the home. Children: son, Jason, and wife Tara of Elmore City, OK, daughter, Shelly, and partner Don of Poteau, OK Granddaughters: Suzanna and Addi Loriss and grandson, Skyler Sisters: Carol Formhals and husband Bob, Karen Hevel and husband Rick all of Grand Junction, CO A host of nieces, nephews, cousins, and friends who had become family. Cremation arrangements are with Wooster Funeral Home. Condolences may be sent to the family @www.woosterfuneralhomes.com Memorial graveside services are scheduled for 1:00 p0.m., Sunday, October 24, 2021 at the Katie Cemetery in Katie, Oklahoma

Frank Joseph Loriss Jr. of Elmore City, OK was born October 24, 1955, to Frank Sr. and Dorothy Bronis Loriss in Chicago, Illinois and passed from this life on October 1, 2021, in Oklahoma City. Frank spent a large part of his childhood in Chicago.... View Obituary & Service Information

The family of Frank Joseph Loriss Jr. created this Life Tributes page to make it easy to share your memories.