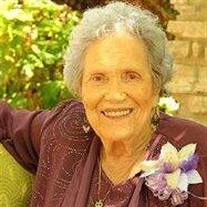 Frances Jarratt Lee, of Pauls Valley, left this earth to join her husband Monte in eternity on June 17, 2014. Frances was born in Champion,Texas on January 18, 1920, and grew up on a small farm there. She was one of five children: brothers Felix, Curtis and David, and sister Genevieve. She attended Texas Tech University, where she met her future husband, Monte Lee, who was also a student at Tech. Frances received a bachelors degree in Business from Texas Tech. They were married on February 8, 1942. Monte had joined the U.S. Army, 36th Division National Guard, and when the war began, he was activated. He and Frances were separated for two and one-half years by the war. After the war, Monte and Frances were reunited, and set up their home in Lubbock, Texas. There they had two children, David William Lee and Sharon Jean Lee. Monte and Frances moved to Pauls Valley in 1951. Frances and Monte were united in every way in a Christian marriage. When they moved to Pauls Valley, they immediately joined the First Methodist Church, where membership was a passion for them. This church, and the friends they made there, formed a significant part of the rest of their lives. Frances was active with PEO, United Methodist Women and many other activities in the church, including Sunday school and vacation bible school. Monte and Frances were also members of the Crusaders Sunday School class, which Monte taught for over forty years, with Frances as his spiritual and intellectual partner in that endeavor. Frances was a leader with the Brownies and the Girl Scouts. They lived most of their lives on Jackson Hill, where their children went to grade school, and they made many friends there, as well as all over Pauls Valley. Frances was actively involved in the restoration of the Pauls Valley Depot, and the creation of the Pauls Valley Recycling Center. She was a supporter of the Pauls Valley Chamber of Commerce, the Pauls Valley Bosa Center, the Pauls Valley Recreation Center and the Pauls Valley Foundation and Pauls Valley Main Street Project. After Monte retired from the federal government, he and Frances founded Monte R. Lee & Company, in Oklahoma, and Frances was on the Board of Directors and was the bookkeeper for the company. They continued to live in Pauls Valley the rest of their lives. Pauls Valley was in the very fabric of their souls. Frances was preceded in death by her husband Monte. Most importantly, Frances dedicated her life to being a wonderful caring mother and grandmother, and she was a positive influence in the lives of everyone that she met. Frances leaves her daughter, Sharon Jean Lee Ross, and her husband, Gary Ross, of Carbondale, Colorado. Frances also leaves her son, David W. Lee, and his wife, Lynn Leigh Lee, of Oklahoma City. Frances was graced with five grandchildren: Cerisa Law and her husband Jack Law, and their son and Frances’s great-grandson Wyatt Law, of Colorado Springs, Colorado; Dylan Ross of Basalt, Colorado; Taylor Lee, of Madison, Wisconsin; Bryan Hilton and his wife Corry, of Dillon, Colorado; and Blake Hilton, of Redlands, California. Services will be held Thursday, June 26, at 2:00 p.m., in the First Methodist Church of Pauls Valley, under the direction of Wooster Funeral Home in Pauls Valley. Interment will be in the Mt. Olivet Cemetery. In lieu of flowers, the family requests that any memorials be made to Skyline Urban Ministry, or the Pauls Valley Foundation.

Frances Jarratt Lee, of Pauls Valley, left this earth to join her husband Monte in eternity on June 17, 2014. Frances was born in Champion,Texas on January 18, 1920, and grew up on a small farm there. She was one of five children: brothers... View Obituary & Service Information

The family of Frances Josephine Lee created this Life Tributes page to make it easy to share your memories.