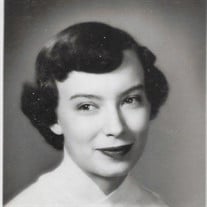 Frances Allene Chaufty August 25,1931 – February 5,2022 Frances Allene Chaufty of Stillwater, Oklahoma was born August 25, 1931 in Muskogee, Oklahoma to W. A. Gilbert and Frances Bernice (Tennison) Gilbert and passed from this life on Saturday, February 5, 2022 in Stillwater, Oklahoma at the age of 90 years. Allene grew up in Tulsa, Oklahoma and graduated from Will Rogers High School, after which she furthered her education at Oklahoma A&M (now Oklahoma State University). She pledged a sorority, Zeta Tau Alpha and at various fraternity events was introduced to Raymond Chaufty of Pauls Valley. They fell in love and were married on August 10,1950. After Raymond graduated he had to fulfill his military obligation in Japan. After he returned from the war, they settled in Pauls Valley as Raymond joined his father at the Otasco store. Raymond eventually bought the store and Allene helped with the bookkeeping. After staying home with her infant sons she went to work for four doctors as a bookkeeper. The four doctors eventually went on to form Pauls Valley Physicians Clinic where she served as Office Manager. She resided in Pauls Valley for 62 years where she raised her two sons Billy and Jimmy. She was very much evolved in their activities in school, scouting and athletics. She was a member of the First Baptist Church of Pauls Valley and served on the board of directors of the Pauls Valley General Hospital. Allene can always be remembered by her wry smile, her teasing personality and her undying love for her husband of 68 years. She was a strong willed person with a gentle heart. The highlight of her life on earth would be her family. Everything she did was centered around her family and supporting them well for 90 years. Mrs. Chaufty is survived by: 2 Sons – Bill Chaufty and his wife Sharon of Stillwater, Oklahoma Jim Chaufty and his wife Teresa of Stillwater, Oklahoma 4 Grandchildren – April Lai and her husband Joe of Tulsa, Oklahoma Dylan Chaufty of Oklahoma City, Oklahoma Kyle Chaufty and his partner Rainey of Oklahoma City, Oklahoma Tracy Chaufty of Broken Arrow, Oklahoma 10 Great-Grandchildren – Cooper Lai, Olivia Lai, Fisher Lai, Whit Lai, Simone Gibbs, Jeremiah Chaufty, Emma Kirkpatrick, Stella Chaufty, Cash Martin and Kaleb Henley And many other family and friends. In lieu of flowers, donations can be made to the First Christian Church of Pauls valley, 300 north Ash Street, Pauls Valley, Oklahoma, 73075. This church has been so good to the Chaufty family over many years. A very special thank you to the staff of Primrose Retirement Community of Stillwater, Oklahoma and the Karman Legacy Hospice of Stillwater, Oklahoma for the wonderful care they provided Allene. Funeral service are scheduled for 10:00 a.m. Friday, February 11, 2022 at the Wooster Funeral Home. You may send your condolence to the family at www.woosterfuneralhomes.com

The family of Frances Allene Chaufty created this Life Tributes page to make it easy to share your memories.