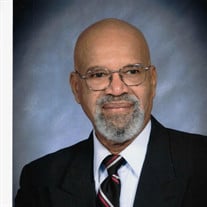 Floyd James Jr was born June 27, 1940 in Pauls Valley, OK to Floyd and Marie James. He attended Dunbar Elementary School and graduated Pauls Valley High school as one of the first students to integrate. Floyd married Juanita Bush, September 4, 1974 and had a son, Floyd “Trey” James, III. Floyd received his Bachelor of Science (1964), MBA and MMA from Central State University (1973) and retired from OU Medical Center in 2006 after 29 years of service. He was a lifetime member of the Kappa Alpha Psi Fraternity, served on the board of directors at the Oklahoma Health Services Federal Credit Union, was a Certified Medical Technologist and sang in the choir at Our Lady’s Cathedral and Corpus Christi Catholic Church, where he remained a member at the time of his death. He was a boss, teacher, coach, mentor, husband, father, and friend to many. He was preceded in death by his parents, Floyd Sr and Marie James, his beloved wife Juanita James and leaves behind to cherish his memory, his son Floyd James III (Stefanie), son John David Bush, daughter Johnita Guidry, his sister Nadine Fisher (Edwin) and brother David James (Lucinda), as well as a host of nieces, nephews, cousins, extended family and friends. It is with incredible gratitude the family recognizes and thanks Cathy Crytzer, Floyd’s loyal companion, for her selfless care giving in his final years on this earth. She is family. In lieu of flowers, memorials can be sent to the American Cancer Society, PO Box 22478, Oklahoma City, OK 73123. Condolences may be sent to the family @www.woosterfuneralhome.com Visitation hours for family and friends are 9:00a.m. to 4:30 p.m. Friday, March 12, and Saturday March 13 at Wooster Funeral Home 1601 S. Chickasaw, Pauls Valley,OK.

The family of Floyd James created this Life Tributes page to make it easy to share your memories.