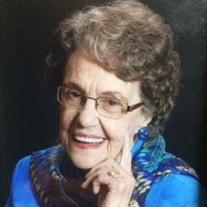 EVA MARIE GROSS KEITH Eva Marie Gross was born to Herman M. and Perthena Gross on March 11, 1925 in Galveston, Texas. She grew up in a fun-loving, close knit family with her older brother, Jack and her younger sister, Peggy. When WWII began, Malcolm Keith, a handsome bow-legged cowboy from Oklahoma City, OK moved to Galveston to work as a welder in the ship yard. He rented a room in her family’s home. She had never seen a cowboy before, and he had never met such an incredible gal. It was definitely meant to be! Malcolm and Eva fell deeply in love and were married in Galveston on January 6, 1943, in the Methodist Church down the street where she sang soprano in the choir. Very soon Malcolm was drafted into the Army, and they moved to New Orleans, Louisiana. Eva worked as a checker in the grocery store across the street from the motel where they lived. Later she returned home to Galveston to have their first child Karen. When Karen was six weeks old, Eva and Karen moved to Oklahoma City to establish a home near Malcolm’s dad and mom, Vernon and Estelle Keith. Malcolm came back after the war was over and worked as a building contractor. That city girl even learned to ride a horse and watched her cowboy rope calves at countless rodeos over the years. In 1946 after experiencing the miracle of giving birth, Eva knew then for certain that there had to be a God. She gratefully received Jesus Christ as her personal Savior and Lord, was baptized and joined Portland Avenue Baptist Church with Malcolm. On March 12, 1948, they were doubly blessed with their second child, Jack. The family now complete, Eva’s greatest joy was giving lots of love to all her family and friends. Later they moved to Yukon for three years and then back to Oklahoma City for a time. In 1964 they purchased a ranch south of Blanchard, Oklahoma and joined Blanchard First Baptist Church, where Eva was church secretary for several years, taught Sunday School and of course, always sang in the choir, later joining the First Baptist Church of Dibble. Again, singing all the way!! As the grandchildren and greatgrandchildren came along nothing was more fun than going to Grandma Eva’s and Grandpa “Eva’s” as they would say. This is when Eva truly shined! Her motto was “whatever you do, just make sure you have fun”! And fun they had!! Singing, playing the piano and organ (she taught herself both), fishing, telling stories, “speeding” over the dam on the way to Chickasha for Braum’s or Jake’s Rib BBQ and, of course, cooking and eating all her wonderful food! But most of all receiving her unconditional love and acceptance with lots of “smackers” while making unforgettable sweet memories! She and Malcolm took lots of fun road trips all over the country with their camper. When home, their favorite thing was getting on the big front porch overlooking the lake with the poochies and a hot cup of coffee counting their blessings. After Malcolm went to be with the Lord in 2002, she continued to live on the ranch until 2013, moving then to OKC to live with Karen and her husband, John, also joining Putnam City Baptist Church. Again, still having fun and making blessed memories right up to the moment when Jesus gently took her by the hand February 3, 2021, for one last glorious move to be with Him forever and all her waiting loved ones. Now with a new body to enjoy it all and contented with a life well lived, she heard Him say “Well done thou good and faithful servant. Enter into the joy of your Lord”. God gifted this amazing lady with the best gift of all, a heart filled with his inexhaustible love that lavishly overflowed on and clung to all who were blessed to know her. That love is still flowing through each one and will continue to bear fruit now and for all eternity because “love never fails”! Without a doubt, a richer legacy no one could ever leave! Thank you Mama from all of us! “Ain’t love grand”!! Eva was survived by her children Karen Ford and husband John, of OKC, Jack Keith and his wife Gail of Elmore City, OK; grandchildren John H. Ford, II and wife Deborah, Edmond, OK; Kimberly Chretin and husband Victor, OKC; Becky Custer and husband Joe, Kenefic, OK; Matt Keith and wife Jessi, Elmore City, OK; Amy McLin and husband Will, Elmore City, OK ; and greatgrandchildren Ryanne Ford and David Ford, Edmond, OK; Jace Chretin, OKC, Joshua Chretin and wife Carolina, San Antonio, TX; Jordan Chretin,Anchorage, AK Jack Custer and Jay Custer, Kenefic, OK; Ty Jack Keith , Hallie Keith, Whit Keith, Elmore City, OK; Ridge McLin, Madigan McLin, Merrick McLin, Elmore City, OK. Sister, Marjorie (Peggy) Richardson, Richardson, TX. Nieces, Kathy Lambard, Carol Holloway, Laurie Richardson, Linda Gross, Susan Handa. Nephew, John Gross. Private Family memorial will be held on Friday, April 2, 2021 at 10:30 am, at the Elmore City Cemetery.

EVA MARIE GROSS KEITH Eva Marie Gross was born to Herman M. and Perthena Gross on March 11, 1925 in Galveston, Texas. She grew up in a fun-loving, close knit family with her older brother, Jack and her younger sister, Peggy. When WWII began,... View Obituary & Service Information

The family of Eva Marie Keith created this Life Tributes page to make it easy to share your memories.