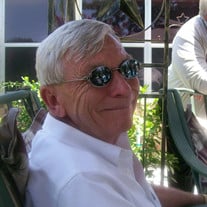 Ernest Walton Tate, Jr., better known as “E.T.” of Elmore City, Oklahoma was born to Ernest Walton and Jewel (Mayfield) Tate, Sr. on October 10, 1947 in Kermit, Texas and passed from this life on September 8, 2014 in Tulsa, Oklahoma at the age of 66 years. Ernest grew up and attended school at Kermit, Texas. He attended college at the University of Texas and Sul Ross University in Alpine, Texas where he received his Bachelor’s degree in Chemistry and Biology. On October 22, 2010, Ernest married Sandra Jean Harvell in Healdton, Oklahoma. E. T. worked for Nalco Champion in Oklahoma City and has worked in the oilfield most of his life. In his spare time he enjoyed raising longhorn cattle, rebuilding his 1980 Corvette, fishing, camping, going to casinos and traveling. Ernest also enjoyed reading and learning something new. The highlights of his life were his children, grandchildren, family, friends and the time spent with them. E. T. will be remembered for his sense of humor, making people laugh and his famous quote, “If you can’t have fun, don’t do it.” E. T. is survived by: His wife: Sandra of the home Son: Ernest “Trey” Walton Tate III of Midland, Texas 2 step-sons: David Harvell of Big Spring, Texas Cody Ward and wife Callie of Spring Branch, Texas 2 daughters: Nicole Holt and husband John of Centerville, Texas Stephanie Tate of Kilgore, Texas 1 step-daughter: Toni Farris and husband James of Prescott Valley, Arizona Brother: David Linebery of Odessa, Texas Sister: Bonnie Jean White of Abilene, Texas 12 grandchildren and 1 great-granddaughter A host of family and friends E. T. was preceded in death by: Wife: Debra Ann Tate on July 31, 2009 Parents: Ernest and Jewel Tate, Sr. Funeral services are scheduled for Friday, September 12, 2014 at 10:00 a.m. in the Wooster Funeral Home Chapel in Pauls Valley, Oklahoma with Ray Eastridge officiating. Visitation will be held on Friday, September 12, 2014 from 6:00 p.m. until 8:00 p.m. at Raider Funeral Home in Kilgore, Texas. Interment will be in Harmony Hills Cemetery in Tatum, Texas on Saturday, September 13, 2014 at 10:00 a.m. under the direction of Wooster Funeral Home. You may send a condolence to the family at www.woosterfuneralhomes.com.

The family of Ernest Walton Tate Jr. created this Life Tributes page to make it easy to share your memories.