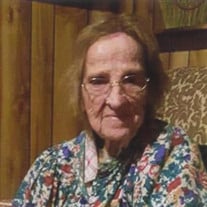 EMILY LOUISE LYNN Emily Louise Carlton was the eleventh child of twelve children born to George Richard and Ethel Duncan Carlton. She was born on June 22,1936 and went to her eternal home on Sunday, October 31,2021 at the age of 85 years. She was raised on a farm near the McCarty School. She attended McCarty School, later making for her what was a big change, going to the Elmore City School. It was on January 15,1955 that she became Mrs. Hardy Lynn. Emily truly loved her days of being a homemaker. She was an impeccable housekeeper and kept her lawn the same way. She even sat and trimmed with scissors areas where the grass did not get mowed. She kept this vigil of maintaining everything clean and neat up until two weeks before her death. It was a grateful heart that appreciated what she had been given that led her to take such good care of everything near her. She taught others to be proud of everything for which they worked. She taught her children and grandchildren how to love wholeheartedly, be determined to reach their goals, never give up, and always be fair to others. Sister Hazel three years younger than Emily said that Emily was her hero. Hazel described Emily as a much kinder and compassionate person than Hazel herself. Hazel was a self- proclaimed brat but Emily saw to it that no one picked on her baby sister. While Emily and Hardy were dating they always let her go with them wherever they went. When Hazel and Emily were children the family typically had a special treat of cookies or ice cream once a week. Hazel quickly gobbled hers because she knew Emily would share her treats with Hazel. Hazel stated that probably no one would believe it but when Emily and Hazel were the only two children left in the household they got along beautifully. Music was a very big part of her life. Hardy and David Lynn could be found playing music on the front porch at the house and she always had music playing. The grandchildren loved it that she even enjoyed their music. She purchased her own album of Dead or Alive by Bonjovi, loved Elvis Presely singing and jammed out with the kids to any kind of music with her dancing. Definitely, the highlight of her life was family. She enjoyed making quilts, ceramics and playing games with her sisters, giving orders and keeping everyone busy. Emily is survived by: Son: Aaron Lynn Daughter: Vicki Hucks Grandchildren: Melissa, Michael, and Matthew Great-grandchildren: Caitlynn, Kevin, Eythan, Cora, Mercedes, Shawnia, Marriah, Michaela and Madison Great-great grandchildren: Olivia, Willow and Nickolas. Sister Hazel Clark and husband Jerry She was preceded in death by her parents, George and Ethel Carlton, 6 sisters, 4 brothers and her husband, Hardy Lynn Graveside services for Mrs. Lynn are scheduled for Wednesday, November 3, 2021 at 2:00 p,m,.with Joe Terell officiating. Interment will follow under the direction of Wooster Funeral Home. Condolences may be sent to the family at www.woosterfuneralhom.com

EMILY LOUISE LYNN Emily Louise Carlton was the eleventh child of twelve children born to George Richard and Ethel Duncan Carlton. She was born on June 22,1936 and went to her eternal home on Sunday, October 31,2021 at the age of 85 years. She... View Obituary & Service Information

The family of Emily Louise Lynn created this Life Tributes page to make it easy to share your memories.