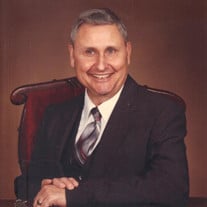 Eddie Brooks was born September 25, 1926 in Holdenville, OK to Ed and Ada (Scott) Brooks. At age 17 he entered the Navy and served two years before returning to Spaulding, OK to complete high school. He then enlisted in the Army Reserves in 1949 and served until 1953. Eddie installed carpets for John A. Brown for 40 years. He married and had 3 children. Eddie began working for J. C. Penney in 1975 where he met the love of his life, Rosalyn. They were married on February 13, 1976. Eddie and Rosalyn retired in 1989 and moved to their farm in Elmore City where they spent the next 30 years enjoying time with family and friends. Eddie accepted the Lord as his Savior at age 12 and has been an active member of Hillcrest Baptist Church for 30 years. Eddie lived a life that showed his love for the Lord and his love for his family every moment of every day. Eddie was preceded in death by his parents, Ed and Ada Brooks, his brother George Brooks and his sons Jim Roady, Bob Roady, Jerry Roady and Shelby Brooks. He is survived by his wife Rosalyn, daughter Marilyn Brooks, son Eddie Brooks and his wife Sharon, daughters-in-law Portia Roady, Jean Roady and Narita Roady. Eddie had 17 grandchildren: LiAnn Armitage and husband Mitchell, Robbie Stavinoha and husband Mike, Cathy Robinson, Christie Wigfield and husband Gary, Terrie Allen and husband Pat, Cindy Scarberry and husband Terry, Rodney Brooks, Aimee Hobbs and husband Justin, Amber Whitmire and husband Wayland, Melissa Butkawski, Cody Brooks, Stacey Thompson, Cheryl Winkle and husband David, Sabrina Brooks, Ashley Garcia and husband Eddie, Michael Brooks and wife Tara and Shannon Brooks. Eddie is survived by 35 great-grandchildren and counting, as well as 1 great-great-granddaughter. Funeral services are scheduled for Friday, June 28, 2019 at 2:00 p.m. in the Hillcrest Baptist Church in Wynnewood, OK with Brother Mike Mobley, Brother Doug Brewer and Brother Alan Carroll officiating. Interment will follow in the Katie Cemetery in Katie, Oklahoma under the direction of Wooster Funeral Home. Condolences to the family may be sent at www.woosterfuneralhomes.com.

Eddie Brooks was born September 25, 1926 in Holdenville, OK to Ed and Ada (Scott) Brooks. At age 17 he entered the Navy and served two years before returning to Spaulding, OK to complete high school. He then enlisted in the Army Reserves in... View Obituary & Service Information

The family of Eddie T. Brooks created this Life Tributes page to make it easy to share your memories.