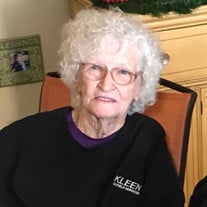 Earlene Upshaw was born August 12, 1934, in Joy, Oklahoma to Earl Dewey and Leota Mae Clemons. Her early years were spent in the Joy and Wynnewood area. In 1939, they headed to California on the heels of the dustbowl. Before they made it there, they were involved in a wreck in the Texas Panhandle where her dad was killed. They returned to Oklahoma, and she lived around Pooleville for many years after that. In 1950, Earlene married E. L. Thompson. They had 5 kids, Linda, Don, Kenny, Donna, and Tammy. She married her second husband, Travis Upshaw in 1966. They had one son, Travis Jr. They lived in Ratliff City until 1980 when she moved to Elmore City. Most of her kids lived in Elmore as did her only sister, Betty. It only made sense to be as close to them as she could. Earlene and Travis were married for 53 years when he passed away in 2020. Earlene was a housewife her whole life. Her love of kids began early in her life and lasted a lifetime. She babysat her grandkids as much as she could. She would cook huge meals on Sundays so all of the kids that wanted to could come over and eat lunch and visit. About 2 weeks ago, she said that she could watch Kristen’s girls while she worked and, in her mind, she truly wanted too and thought that she could. Her antics and her humor will be greatly missed. Earlene is survived by: Sons: Don and Kathy Thompson of Bray Larry and Julia Upshaw of Tulsa, Oklahoma Travis and Stephanie Upshaw of Elmore City Daughters: Linda and Tony Davis of Elmore City Donna and Danny McFadden of Elmore City Tammy Thompson of Elmore City Niece: Cathy and Joe Wood of Elmore City 14 Grandchildren, 32 great-grandchildren and 7 Great-great-grandchildren Brother-in-law: Terry McIntyre of Elmore City A host of nieces, nephews, family, and friends Earlene was preceded in death by: Husband: Travis Upshaw, Sr. Parents: Earl Clemons and Leota Reed Son: Kenny Thompson Brother: JD “Boodle” Gilbert Granddaughter: Melinda Ille Great-granddaughter: Taylor Spencer Sister: Betty McIntyre Graveside services are scheduled for 2:00 p.m., Monday, February 28, 2022, at the Pooleville Cemetery with Rev. Danny Reed and Ronnie Burton officiating. Services are under the direction of Wooster Funeral Home. You may send a condolence to the family at www.woosterfuneralhomes.com.

Earlene Upshaw was born August 12, 1934, in Joy, Oklahoma to Earl Dewey and Leota Mae Clemons. Her early years were spent in the Joy and Wynnewood area. In 1939, they headed to California on the heels of the dustbowl. Before they made it there,... View Obituary & Service Information

The family of Earlene Upshaw created this Life Tributes page to make it easy to share your memories.