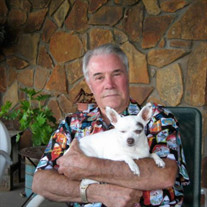 Earl Hugh Gibson of Pauls Valley passed away at his home on June 17,2022 at the age of 87 years 11 months and 17 days. Earl was born in Wynnewood, Oklahoma at the Red Gate Ranch to William Earl Gibson and Mary (Bannister) Gibson. He started school at Joy and later moved with his family to California. Earl graduated from Fullerton High School in Fullerton, California and was recruited by the Brooklyn Dodgers farm league. A talented first baseman and pitcher, his career was cut short due to an injury. Afterwards, he worked for Sears & Roebuck and later as a mortgage loan officer with the Advanced Mortgage Corporation. He moved back to Wynnewood with his family in 1972 to be closer to his parents. Earl married his high school sweetheart, Carole, on September, 22 1954 in Whittier, California. Earl enjoyed fishing, golf, coaching baseball, investing in the stock market and long motorcycle rides with his friends. Those who came to know him best soon realized that he was highly intelligent, had a quick wit about him, loved animals of all kinds and could be an outspoken armchair politician given to occasional outbursts of outrageous indignation against injustice or oppression of any kind. “Defend the weak and the fatherless; uphold the cause of the poor and the oppressed.” (Psalm 82:3 NIV) “Then the King will say to those on his right, ‘Come, you who are blessed by my Father; take your inheritance, the kingdom prepared for you since the creation of the world. For I was hungry and you gave me something to eat, I was thirsty and you gave me something to drink, I was a stranger and you invited me in, I needed clothes and you clothed me, I was sick and you looked after me, I was in prison and you came to visit me.’ (Matthew 25:34-36 NIV) Earl was preceded in death by his parents, Earl and Mary Gibson and his beloved wife, Carole. He is survived by his son, Chris Gibson and his wife Brenda of Toledo, Ohio; his daughter, Sheila Jacobson and her husband, Terry of Pauls Valley, Oklahoma. His grandchildren Kelsey Willamson and her husband Denver Williamson, of Pauls Valley; Lane Gibson of Chicago, Illinois and Grace Gibson of Toledo, Ohio. His great grandchildren, Sawyer Williamson and Cale Williamson. Earl was a wonderful husband, father, grandfather and friend to many. He will be remembered and missed by all those who loved him. In lieu of flowers, the family requests memorials be made to your local animal shelter in Earl's name.

Earl Hugh Gibson of Pauls Valley passed away at his home on June 17,2022 at the age of 87 years 11 months and 17 days. Earl was born in Wynnewood, Oklahoma at the Red Gate Ranch to William Earl Gibson and Mary (Bannister) Gibson. He started... View Obituary & Service Information

The family of Earl Hugh Gibson created this Life Tributes page to make it easy to share your memories.

Earl Hugh Gibson of Pauls Valley passed away at his home on June...