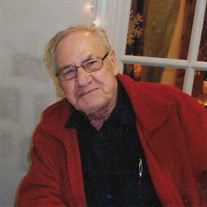 E. J. Tucker, formerly of Pernell, Oklahoma, was born on May 18, 1928, in Ralston, Oklahoma, and passed from this life on October 17, 2017, in Oklahoma City, Oklahoma, at the age of 89 years. E. J. grew up in Jumbo, Oklahoma, and attended school in Moyers, and later in Shawnee. In 1945, he graduated high school alongside Gordon Cooper. He then attended college at Oklahoma A & M. On September 26, 1952, E. J. married Betty Jean Walters, the love of his life, in Oklahoma City, Oklahoma. Mr. Tucker worked as a foreman for Wilson Foods for 28 years. E. J, a gifted athlete, turned down a baseball contract with the Milwaukee Braves to remain close to family, and played exhibition basketball games against the Harlem Globetrotters. He played baseball for the Wilson Packers in the Industrial League in the 1950’s, also playing for Wilson in both basketball and league bowling. E.J. helped to run a prison ministry in Lexington for a number of years in the early 2000’s. In his spare time, he enjoyed golf, and was a true sports enthusiast. His greatest devotion was always to his family, and to his deep and abiding faith in his Lord and Savior, Jesus Christ. Mr. Tucker is survived by: His wife: Betty Jean Tucker of the home 2 daughters: Jill Shaw and husband Patrick of Oklahoma City, Oklahoma Gail Grego of Norman, Oklahoma 2 sons: Ross Tucker and wife J. J. of Davis, Oklahoma Jeff Tucker and wife Lisha of Wichita, Kansas 2 brothers: Darrell Tucker and wife Emily of Oklahoma City, Oklahoma Jimmie Tucker and wife Cissy of Noble, Oklahoma 6 grandchildren: Lindsey DeBerry and husband Jason; Reagan Tucker; Joshua Grego; Blanton Tucker; Emma Tucker; and Lily Tucker 2 great-grandchildren: Jack and Raphael Mr. Tucker was preceded in death by: His parents Sister: Mary Taylor Funeral services are scheduled for Friday, October 20, 2017, at 10:00 a.m. at Mayridge Baptist Church, 4617 S. May Ave., Oklahoma City, Oklahoma, with Bro. Charles Melton officiating. Interment will be in the Foster Cemetery under the direction of Wooster Funeral Home. You may send condolences to the family at www.woosterfuneralhomes.com.

E. J. Tucker, formerly of Pernell, Oklahoma, was born on May 18, 1928, in Ralston, Oklahoma, and passed from this life on October 17, 2017, in Oklahoma City, Oklahoma, at the age of 89 years. E. J. grew up in Jumbo, Oklahoma, and attended school... View Obituary & Service Information

The family of E. J. Tucker created this Life Tributes page to make it easy to share your memories.

E. J. Tucker, formerly of Pernell, Oklahoma, was born on May...