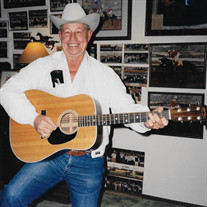 E. J. (Earl James) Branch of Lindsay, Oklahoma was born to Norman Jackson and Helen Mae (Huckeby) Branch on February 3, 1931 in Alex, Oklahoma and passed from this life on January 18, 2020 in Lindsay, Oklahoma at the age of 88 years. E.J. grew up and attended school in Bradley and was a very accomplished athlete. He later served his county in the U.S. Navy during the Korean conflict. E.J. was the owner and operator of Branch Trucking in Lindsay, Oklahoma. E. J. enjoyed horsebreeding and raising horses which he successfully raced. He also liked pickin’ and grinnin’ on the guitar and was an avid sports fan. On November 01, 1990, E. J. married Linda Prickett in Gainesville, Texas. The highlights of his life were his family and grandchildren. E. J. could light up the room with a smile on his face and his contagious laughter. He was a loyal friend and was a master at making others feel at ease. He was a Mason, member of the American Legion and a 50 year plus member of the VFW. E. J. is survived by: His wife Linda of the home 2 daughters – Kelly Pickett of Oklahoma City and Kati and Kevin Foraker of Lindsay 4 brothers – Bill Branch and Carolyn of Purcell; Bryan Branch and Joan of Lindsay; Tommy Branch of Oklahoma City and John Branch of Lindsay 3 sisters – Maxine Barrett and Rex of Oklahoma City; Merlene Jones of Bradley; and Sue Wilhelm and Craig of Dibble 4 grandchildren – Jack Pickett and Linda Socash; Sam Pickett; Brooklynn Nunley and Jacob Trammell; and Nash Foraker Great granddaughter – Violet Pickett Numerous nieces and nephews E. J. was preceded in death by his parents, and his beloved nephews Terry Jack Branch, Josey Branch and Max Branch; and one niece, Casey Jones. Serving as pallbearers are: Lynden Branch, Jimmy Branch, Brady Jones, Billy Barrett, Billy Branch, C. J. Branch and Clint Branch. Honorary bearers are: Bruce Jones, Jeff Wilhelm and John Boone Branch Funeral services are scheduled for Thursday, January 23 at 2:00 p.m. in the Erin Springs Baptist Church with Pastor Clay Hicks officiating. Interment will be in the Bradley Cemetery under the direction of Wooster Funeral Home. You may send a condolence to the family at www.woosterfuneralhomes.com.

E. J. (Earl James) Branch of Lindsay, Oklahoma was born to Norman Jackson and Helen Mae (Huckeby) Branch on February 3, 1931 in Alex, Oklahoma and passed from this life on January 18, 2020 in Lindsay, Oklahoma at the age of 88 years. E.J. grew... View Obituary & Service Information

The family of E. J. Branch created this Life Tributes page to make it easy to share your memories.