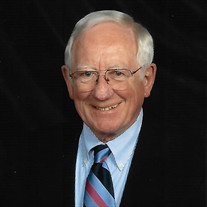 James H. Lindsey M.D, ("Dr. Jim"), passed away peacefully on Monday, March 12th, at his second home, Pauls Valley General Hospital. Born in Pauls Valley in 1934 to Dr. Ray Lindsey, M.D. and Bernice (Patterson) Lindsey. Dr. Jim was 84. With the help of his Lord, Dr. Jim saved, healed and touched countless people through his brilliant medical prowess, his witty and sometimes off-color humor and his tough, but tender and compassionate heart. Dr. Jim delighted and brightened many with his story telling and joke telling. Everyone has their own "Dr. Jim story". His humor was special medicine. Dr. Jim was the valedictorian and a three-sport-athlete at Pauls Valley High School, graduating in 1952. He achieved the rank of Eagle Scout from the Boy Scouts of America. Graduated in 1955 from the University of Oklahoma where he was a member of the Beta Theta Pi fraternity. He went to medical school at Northwestern University in Chicago, IL, where he was president of his Junior and Senior classes. After completing his internship and residency in General Surgery at Chicago Wesley Memorial Hospital, Dr. Jim returned to his roots in 1964 to practice medicine alongside his father as a 3rd generation Lindsey surgeon. Dr. Jim was on the medical staff of Pauls Valley General Hospital for 38 years, until 2002, where he served as Chief of Staff on several occasions. He served on the medical staff of Pauls Valley State School until 2002. One of his favorite roles was that of Clinical Instructor in Surgery for the University of Oklahoma Health Science Center where he shared his talents and shaped careers of countless medical students in the small town rotation program. He was most recently the resident physician for the Willows Assisted Living Residence. After retirement, Dr. Jim was honored to serve on the Board of the Pauls Valley National Bank. Other highlights of his accomplishments: Fellow of the American College of Surgeons, President of the Oklahoma Medical Association, Received the University of Oklahoma College of Medicine Aesculapian award for excellence by a volunteer faculty. He served as Elder and Deacon of the First Presbyterian Church. He found great joy in expressing his musical talents by playing the drums for the Ragtime Rascals. He is survived by his wife and best friend of 59 years, Judith Lynn Lindsey (Judy), his daughter Ellen Lindsey Dougherty and husband Tom of Stamford, CT, son Greg Lindsey and wife Diana of Oklahoma City. Dr. Jim is preceded in death by his oldest son, Mark Lindsey of Oklahoma City. Dr. Jim is also survived by his sister Lou Hall of Pauls Valley and her daughters Kathy and Amy Hall. Dr. Jim will be fondly remembered by his eight grandchildren; Abigail Lindsey, John Lindsey, Thomas Dougherty, Matthew Dougherty, Sophia Lindsey, Anabelle Lindsey, Reed Lindsey, Elliot Lindsey and one great-granddaughter, Ellison Thompson. Dr. Jim will be missed by many other family members. Dr. Jim was a beloved physician, husband, father, brother, uncle, grandfather, great grandfather, teacher, mentor and friend. He will be missed by many, but kept alive in our hearts through our fond memories and stories of him. The family would like to express their heartfelt appreciation to the talented and dedicated staff at Pauls Valley General Hospital, Dr. Bill Wright and Dr. Susan Jones, for their excellent and compassionate care of Dr. Jim. A celebration of life service will be held at the First Presbyterian Church 320 N. Walnut, Pauls Valley, OK at 2:30 pm Saturday, March 17th. Wooster Funeral Home is receiving visitors. Memorial donations may be made to Dr. Jim's favorite charity, the Oklahoma Medical Research Foundation; 825 NE 13th, OKC, OK 73104.

The family of Dr. James Harvey Lindsey created this Life Tributes page to make it easy to share your memories.