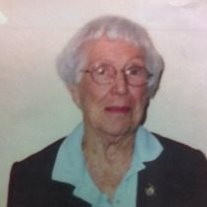 DOROTHY YOAKUM BYRD In Loving Memory of Dorothy Yoakum Byrd Funeral services for Dorothy Yoakum Byrd, age 97, of Rosedale, OK were held Thursday, February 27, 2014 at Wooster Funeral Home Chapel in Pauls Valley, OK with Rev. Mike Ridgway officiating. Interment will be in Paoli Cemetery in Paoli, OK under the direction of Wooster Funeral Home. Mrs. Byrd died February 24, 2014 at Westbrook Gardens in Purcell, OK. She was born January 4, 1917, the youngest of three children of Leonard Lee Yoakum and Lovie (Jackson) Yoakum. She was raised in Rosedale, Ok and graduated from Rosedale High School in 1934. Mrs. Byrd attended East Central University where she received her Bachelor of Science degree in 1939. She did bookkeeping for her husband Carl E. Byrd at his car dealership. They lived in Kennewick, WA for 32 years before returning to Oklahoma in 1975. Mrs. Byrd was a longtime member of the Baptist Church. She was also active in the Garden Club and Beaux Arts in Kennewick, WA. She helped establish Girl Scouts in Kennewick in 1953 and served as a troup leader. After returning to Oklahoma she worked seven years in the Pauls Valley school system at Hill Top School, retiring in 1982. Mrs. Byrd was preceded in death by her parents, her husband Carl Elwin Byrd in 1989, a brother Floyd Lee Yoakum, a sister Elva D. Williamson and three nephews Donald Lee Yoakum, Joel D. Williamson and James A. Williamson. Survivors include nephews and nieces, whom she called her children. They are Gary Williamson and Marilyn Whygle of Oregon, Sharon Couch of Pauls Valley, OK and Sandra Dunkin of Enid, OK. Pallbearers will be Gary Williamson, Nick Williamson, Carl Couch, Jerry Dunkin, Billy Cowan and Jack Jones. Honorary pallbearers will be her relatives and friends. Memorials may be made to Rosedale First Baptist Church or to the charity of the giver’s choice. You may send a condolence to the family at www.woosterfuneralhomes.com.

The family of Dorothy Yoakum Byrd created this Life Tributes page to make it easy to share your memories.