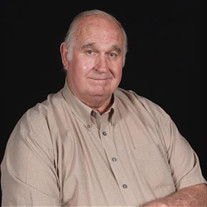 DONNIE LEE BLACK Donnie Lee (Don) Black of Paoli, Oklahoma passed away Thursday August 27, 2015 at his home at the age of 76 years. Don was born August 2, 1939 in Nocona, Texas to Travis and Nell Black. He married his wife Patsy Weatherford Black of Healdton, Oklahoma on December 22, 1959. He was an oilfield worker, then an owner-operator trucker for many years and drove over a million miles without a ticket or an accident. Paoli had been his home since 1975. He was a member of the First Missionary Baptist Church in Healdton, Oklahoma. He was preceded in death by his parents and his brother Bill, all of Oklahoma City, Oklahoma Surviving family members include his wife Patsy of the Home 3 Children: Donna Vaughn and husband Hugh of Pauls Valley, OK ; Debbie Shipman of Norman, OK and David Black of Paoli, OK Grandchildren: Michael Scott of Blanchard, OK ; Jeff Perry and wife Morgan of Norman, OK ; Josh Perry of Norman, OK ; Katy Vaughn Sharp and husband Kaleb of Nichols Hills, OK; Thomas Vaughn of Oklahoma City, OK 3 Great-Grandchildren: Rope and Keeley Scott of Blanchard, OK and Olivia Vaughn of Oklahoma City, OK As well as many nieces and nephews. Funeral services for Mr. Black are scheduled for Tuesday September 1, 2015 at 2:00p.m. at the Paoli First Baptist Church with Rev. John Allen officiating. Interment will be held in the Dixie Cemetery in Stephens County, OK under the direction of Wooster Funeral Home. You may send a condolence to the family at www.woosterfuneralhomes.com

The family of Donnie Lee Black created this Life Tributes page to make it easy to share your memories.