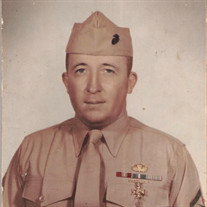 Donald Henry “Sarge” Underwood was born to Edith Christian on April 16, 1935, in Seminole, Oklahoma. He departed this life on September 2nd, 2021, at home with his beloved wife Mary in Lexington, Oklahoma at the age of 86 years old. At the age of 17 Donald dropped out of high school and joined the United States Marine Corp. Donald served in the Korean War and served three tours in Vietnam where he became fluent in Vietnamese and received his first Purple Heart. He became a drill instructor and obtained the rank of Staff Sergeant. Donald separated from the Marine Corp and joined the Army returning to Vietnam for 1 ½ more tours where he received his second Purple Heart with a cluster and again became a drill instructor. Donald retired as a Sergeant First Class in 1981 from the military after serving a combined 23 ½ years with distinction, receiving multiple honors including three Presidential Citation Awards, the Vietnam Cross for gallantry with palm, two Navy Unit Commendation medals, Meritorious Marine Citation Medal, the United States Medal and Combat Action Ribbonamong many others . Donald was proud of his military service and instilled that pride in his family, leading four children and three grandchildren to serve. One of Donald’s favorite stories is how he oversaw Elvis Presley while on a ship traveling overseas. On December 23, 1975, Donald married the love of his life, Mary Evelyn Condit. After his retirement Donald and Mary settled in Foster, Oklahoma where he continued his lifetime passion of raising fighting chickens. During his lifetime Donaldtraveled the world fighting and training his beloved gamecocks. He often bragged about teaching the Vietnamese how to fight chickens. Donald valued education and continued a lifetime of learning new skills. While in the Army he received his GED. He attended some college at the University of Oklahoma. He eventually attended Mid-America Vo-Tech graduating from the electrician apprentice program. Donald worked to instill a strong work ethic in his children, with a motto of work hard and don’t stop until the job is done. He insisted his children be polite and respectful and to always sayyes sir/no sir and yes ma’am/no ma’am. He encouraged his children to stand up for what they believe and always tell the truth. Wisely he told his children “Don’t ever argue with drunk or crazy people.” Above all else, Donald advised his children totake care of family and always “look after your mama.” Donald is survived by his beloved wife, Mary Evelyn Underwood, of the home and seven children: Deborah Watts and husband Steve, Darla Diane White, Sheryl Dykes and husband Randy, Larry Underwood and wife Linda,Kathy LaDonna Fout and husband Danny, Evelyn Fowler and husband Don, Traci Soderstrom and husband David, April Brown and husband Damon, Jake Underwood and wife Tia, Siblings: Linda Shelton and husband Melvin, Ronnie “Red” Davidson and wife Sharon, Frankie Lee Davidson, Carla Cocker and Emileen McGuire and husband Paul. Donald has 40 grandchildren, 80 great-grandchildren, 3 great-great grandchildren and numerous nieces, nephews and friends who will miss him dearly. Donald was preceded in death by his son Donald Henry Underwood, Jr, mother, Edith Christian, and sister Ollie Jean “Jeannie” Rake. Funeral services will be held at the Wooster Funeral Home Chapel in Pauls Valley on Wednesday, September 8, 2021, at 9:30 a.m. followed by a graveside interment with full military honors at Purdy Cemetery under the direction of Wooster Funeral Home. Reverend Tim Duncan officiating with eulogy delivered by Damon Brown. Following services family and friends will gather at Bob’s Pig Shop in Pauls Valley at 3:00 p.m. for food and fellowship. Family requests that in lieu of flowers donations be made to your local V.F.W. or the Homeless Veterans Charity-Wounded Warrior Project. Condolences may be sent to the family at www.woosterfuneralhomes.com.

Donald Henry &#8220;Sarge&#8221; Underwood was born to Edith Christian on April 16, 1935, in Seminole, Oklahoma. He departed this life on September 2nd, 2021, at home with his beloved wife Mary in Lexington, Oklahoma at the age of 86 years... View Obituary & Service Information

The family of Donald Underwood created this Life Tributes page to make it easy to share your memories.

Donald Henry “Sarge” Underwood was born to Edith Christian on...