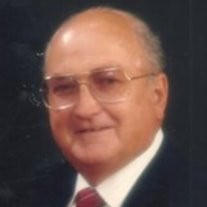 Don Wiley of Foster, Oklahoma was born to Lynn and Mary (Williams) Wiley on August 9th, 1934 in Oklahoma City, Oklahoma, and entered eternal life on March 22, 2013 in Pauls Valley, Oklahoma at the age of 78 years. Don grew up and spent his childhood days in Foster, Oklahoma and graduated from Pernell High School in 1952. During his senior year of high school he began a serious relationship with a sweet girl named June Price. The couple later tied the knot on August 01, 1953 at the First Baptist Church in Tussy, Oklahoma. They soon entered college at East Central State College in Ada, Okahoma where he majored in industrial arts and education. Each summer they would return to the Lynn Wiley farm at Foster, and while he helped his father working, June became a better bride learning to make Mimi’s jelly. After college Mr. Powell, Superintendent at Pernell school, wanted Don to complete the year for a teacher who was going to be out on maternity leave. It turned out he enjoyed teaching so much that he taught for 20 years. Don Wiley was truly the jack of all trades at the school. He was the principal for the majority of the 20 years he taught, he coached many winning girls and boys basketball teams, he drove the school bus and did whatever needed to be done. Although he was a firm disciplinarian for those 20 years, he influenced many children’s lives because he loved them as well as corrected them. He was “Mr. Wiley”, loved and respected even though many had their initials written on his paddle. The paddle was very personalized because it was designed and applied by Don Wiley. If a student was sent to the office and needed paddling, their initials were written on his paddle. If the student made a return visit, and Mr. Wiley found their initials on his paddle, a paddling was in order with no plea option. He always championed the underdog, those who possessed the least. In 1976 he retired from teaching, and he and Terry Helvey began South Central Builders in Elmore City. Ultimately he built churches and homes in many states, and of course, the First Baptist Church in Elmore City. Don was a faithful follower of his church, the First Baptist Church in Elmore City, and served as a deacon and Sunday school teacher. The highlight of his life was his family, his grandchildren and great-grandchildren. He always taught them to “be the better person” and to “shake off your hurt and go forward”. Mr. Wiley is survived by: Wife June Wiley of the Home, Two sons; Randy and Mary Wiley of Foster, OK and Roger and Candy Wiley of Elmore City, OK. One daughter Lainie Lee and husband Kenneth of Odessa, TX. Sister, Marilyn Blaker of Houston, TX. Four Grandchildren Misty, Nick, Anna, and Cindy. Four great-grandchildren Aleah, Isaac, Luke, and Jude. Mr. Wiley was preceded in death by: Parents; Lynn and Mary Wiley, and his brother James Wiley. Funeral services for Don Wiley of Foster, Oklahoma are scheduled for Monday, March 25, 2013 at 2:00 p.m. in the Elmore City First Baptist Church. Interment will be in the Foster Cemetery under the direction of Wooster Funeral Home. You may send a condolence to the family at www.woosterfuneralhomes.com. Further obituary information will be in the next edition of the Pauls Valley Democrat and at www.woosterfuneralhomes.com.

Don Wiley of Foster, Oklahoma was born to Lynn and Mary (Williams) Wiley on August 9th, 1934 in Oklahoma City, Oklahoma, and entered eternal life on March 22, 2013 in Pauls Valley, Oklahoma at the age of 78 years. Don grew up and spent his... View Obituary & Service Information

The family of Don Wiley created this Life Tributes page to make it easy to share your memories.

Don Wiley of Foster, Oklahoma was born to Lynn and Mary (Williams)...