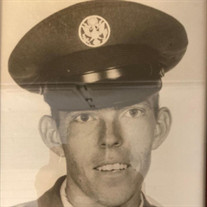 DON SUMNER Don Sumner of Pauls Valley, Oklahoma was born to Elmer and Lottie Anna (Luton) Sumner on November 27, 1944 in McAlester, Oklahoma and passed from this life on August 23, 2021 at the age of 76 years. Don graduated as a Pauls Valley Panther in 1963 and later served his country in the U.S. Air Force. He returned to Pauls Valley in 1965 and choose to spend the remainder of his life working as a custom farmer, working for Jesse and Lewis at Arthur Farms until 2008. Don married Joyce Lynn Brown on October 10,1971 in Paoli, Ok at the home of his parents. They shared a loving marriage lasting 40 years until her death in 2012. Don took care of Joyce during her illness and closing days with constant 24 hour a day care. Don enjoyed the days he was able to have time for fishing and faithfully watching only OU football. He was a constant presence in the lives of his children and friends who demonstrated by word and deed the example of a faithful Christian life. Don was, until his going home to meet his beloved Lord, a witness to the importance of faith which is persistent. Early in his life he was exposed to the healing power of Jesus Christ which led to his living a faithful life. These memories are held closely by his children, three boys and two girls. Mr. Sumner is survived by: Sons: Jeffrey Don Sumner and wife Eve Ann, Chad Everett Sumner and wife Belinda, and Lance Colton Sumner Daughters: Jennifer Dawn Jones and husband Terry and Dana Lynn Sumner Brothers: Charles Sumner and wife Betty, Lynn Sumner and Billy Sumner Sister: Nancy Sims Beloved Grandchildren: McKynzy Epperson and husband Cory, Haleigh Ring, Cierra Ring and Chase Sumner; Great-grandchildren: Faith, Hope and Tony. His two step-grandchildren, five step-great-grandchildren and one step-great- great grandchild and also a host of nieces and nephews, too numerous to count. Mr. Sumner was preceded in death by: His parents: Elmer & Lottie Sumner His wife: Joyce Lynn Sumner Funeral services for Mr. Sumner are scheduled for Wednesday, August 25, 2021 at 1:00 p.m. at the First Baptist Church of Paoli with Bro. Mike Martinez officiating. Interment will follow in the Whitebead Cemetery under the direction of Wooster Funeral Home. Condolences may be sent to the family @www.woosterfuneralhomes.com

DON SUMNER Don Sumner of Pauls Valley, Oklahoma was born to Elmer and Lottie Anna (Luton) Sumner on November 27, 1944 in McAlester, Oklahoma and passed from this life on August 23, 2021 at the age of 76 years. Don graduated as a Pauls Valley... View Obituary & Service Information

The family of Don Sumner created this Life Tributes page to make it easy to share your memories.