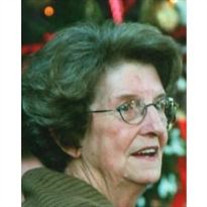 Funeral services for Dixie Lee Felan of Pauls Valley will be held at 1 P.M. Thursday, December 23, at the First Baptist Church of Pauls Valley with Dr. Joe Elam officiating. Interment will be at the Maysville Cemetery under the direction of Wooster Funeral Home. Dixie, a life time resident of Pauls Valley, passed from this life on Sunday, December 19, 2010. Dixie was born Jan. 18, 1933. She married Joe Felan, June 21, 1947, and together they raised 7 children. Dixie was a devoted and loving mother, grandmother, and great-grandmother, and she cherished every moment spent with her family. She was a faithful servant to her Lord and Savior and was a member of the First Baptist Church of Pauls Valley. She was not only grateful for her church family and pastor, but she loved them very much. Dixie treasured the time she spent with her school children in the Pauls Valley School District, working at her numerous jobs throughout the years, volunteering in the community, and all the special times with her Sunday school class. Everyone who knew Dixie would agree that she was selfless, loving, and kind to everyone she encountered. She was always willing to listen to a friend and welcomed all to her home where they found a warm, inviting place to gather. She is survived by children: Tressia Felan Stephens and her husband, Bill Stephens of Pauls Valley, Kay Felan Rankin and her husband, Wayne Rankin of Pauls Valley, Tommy Felan and his wife, Tracy Watts Felan of Pauls Valley, Tina Felan Presley of Pauls Valley, Reba Felan VanDorn and her husband, Erik VanDorn of Huntsville, Texas. Grandchildren: Jodi and Tim Peterie, William and Adrian Stephens, Gena Cowan and Jesse, A.J. and Sonny Hamill, Codi and Jimmy Gee, Tye and Lorin Jacobson, Trevor Felan, Danielle and Kevin Weisner, Colton Lunceford, Lindsey Lunceford, Jennifer and Dan Meaux, Karen and Scott Jensen. Great-grandchildren: Austyn and Paetyn Peterie, Will, Alivia, and Owen Stephens, Garrett, Jackson, and Chloe Cowan, Evan, Ethan and Erick Hamill, Brooke and Dylan Gee, Mora Jacobson, Gunner Jones and Chloe Weisner and Presley Gage, who is soon to arrive, MaKenzee and Micah Meaux, and Shelbey Scardino. Dixie is preceded in death by her husband Joe Mora Felan, sons Joe Lee and Malon Britt Felan, her parents Earl and Carrie Rice, her precious son-in-law Mike Presley, her sisters Martha Rice Buckner and Elzan Rice. You may send a condolence to the family at www.woosterfuneralhomes.com . The family requests that memorials be made to the First Baptist Church in Pauls Valley, Oklahoma.

Funeral services for Dixie Lee Felan of Pauls Valley will be held at 1 P.M. Thursday, December 23, at the First Baptist Church of Pauls Valley with Dr. Joe Elam officiating. Interment will be at the Maysville Cemetery under the direction of... View Obituary & Service Information

The family of Dixie Felan created this Life Tributes page to make it easy to share your memories.

Funeral services for Dixie Lee Felan of Pauls Valley will be...