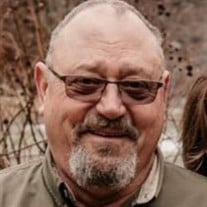 Dennis Porter, age 65, joined his Savior August 10, 2021 surrounded by his family in love and prayer. He was born to Leroy and Melva Porter July 25, 1956. He was born and raised in Pauls Valley where he graduated in 1974. His love of music began with playing the saxophone and the guitar. He furthered his education at OSU Institute of Technology in Okmulgee, OK. Shortly after, he began working in the television and appliance industry. In early 2007, he established his own business, Porter Heat & Air in which he instilled professionalism, respect, and trustworthiness in everyday life. Dennis married the love of his life, Melanie Hobson, on April 5,1986. They began their life together serving God, their family, their church, and their community. He was a loving son, brother, son-in-law, brother-in-law, father, and Pops. He was the first person his mother, mother-in-law, and daughter called when something needed to be fixed. Dennis had a heart of gold that was reflected by his unending service to his community and his family. He was a faithful member of the First Baptist Church of Elmore City where he served by maintaining HVAC systems and participating in events. Dennis was his wife’s best friend, encourager and loved her unconditionally. She called him, “my Mr. Can Fix Anything Man.” No matter the project he would take care of it for her. He passed on his legacy to his children leading by example of a strong work ethic, independence, and faith. He trained the future generation of Mr. Fix-Its by teaching his grandchildren about building anything from legos to fences to gingerbread houses. Most importantly, he served his family and community through laughter, warm hugs, and his strong heart. Dennis is survived by his wife, Melanie Porter; son James Porter and wife, Megan; grandchildren, Caleb, Cameron, and Elizabeth of Utah; daughter Shannon Jones, and husband, Cody of Choctaw. In addition, he is survived by his mother, Melva Porter of Pauls Valley, and brother David Porter, and wife, Sue, and their children. Dennis was preceded in death by his father Leroy Porter and in-laws Bill and Mildred Hobson. Funeral services will be held at the First Baptist Church of Elmore City on August 14, 2021 at 10:00 am. Additionally, the service will be live streamed through Facebook via First Baptist Church Elmore City. In lieu of flowers, donations can be made to the First Baptist Church of Elmore City, Wasatch Cowboy Church in Hooper, Utah, or Oklahoma Baptist Homes for Children. You may send a condolence to the family at www.woosterfuneralhomes.com

Dennis Porter, age 65, joined his Savior August 10, 2021 surrounded by his family in love and prayer. He was born to Leroy and Melva Porter July 25, 1956. He was born and raised in Pauls Valley where he graduated in 1974. His love of music began... View Obituary & Service Information

The family of Dennis Porter created this Life Tributes page to make it easy to share your memories.