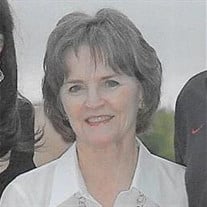 Delores (Dee) June Pierson Henderson Tischer, Norman native, passed away peacefully in her home in Van Alstyne, Texas on November 10, 2015 at the age of 73, with her devoted husband and loving sister by her side. Dee’s story began in Norman, Oklahoma August 2, 1942, born to parents James Orville & Gwendolyn Louise Pierson. She attended Lincoln and Wilson Elementary School, graduated from Norman High School in 1960 and went on to attend Oklahoma University. After starting her family and moving to Dallas, Texas, Dee began a rewarding career with the National Cheerleading Association (NCA) in 1975 where she advanced to Vice-President. On December 15, 1978 she married her soul mate, Harvey Thomas Tischer, and thus their great love story began. Dee and Tom have shared their love for life together traveling, dancing and enjoying time spent with their family and many close friends. Dee was an immensely creative person, expressing herself through painting, sewing and ceramics. She also found joy in cooking great recipes and sharing her home with those closest to her. She retired from NCA in 1992 and moved from Dallas to Van Alstyne in 1995 after she designed her dream home. Dee is survived by her loving husband, Harvey Thomas Tischer, her children, Shawna Dee and her husband David Newton and Bradley James and his wife Jill Henderson; Grandchildren Mallory Mae-June O’Brien, Riley Joseph O’Brien, Cody Daniel Burns and Anna Grace Henderson; Sister Orvella Kay (Derbert) Walker; two nieces ( Sunday and Lori) and a wonderful extended family, including 5 other children (Steven Tischer, Renee Adams, Melanie Swan, Brian Tischer and Greg Tischer, 8 grandchildren and 4 great-grandchildren), all who will remember Dee’s love for life and her warm and caring spirit. Graveside services will be in Norman, Oklahoma at the I.O.O.F. Cemetery a 11:00 a.m. on Monday, November 16, 2015 under the direction of Wooster Funeral Home. You may send a condolence to the family at www.woosterfuneralhomes.com

Delores (Dee) June Pierson Henderson Tischer, Norman native, passed away peacefully in her home in Van Alstyne, Texas on November 10, 2015 at the age of 73, with her devoted husband and loving sister by her side. Dee&#8217;s story began in Norman,... View Obituary & Service Information

The family of Delores J. Tischer created this Life Tributes page to make it easy to share your memories.