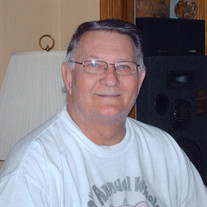 DAVID DEAN WOOSTER David Dean Wooster of Oklahoma City, Oklahoma was born to Jim and Roberta (Jackson) Wooster on November 1, 1943 in Chickasha, Oklahoma and passed from this life in Oklahoma City, Oklahoma at the age of 72 years. David grew up and attended school in Chickasha where he graduated from Chickasha High School. He then attended O.S.U. and later served his country in the U. S. Army. David served during the Vietnam War. He began his lengthy and successful career for Southwestern Bell Telephone in January, 1970 and retired after thirty-one years of service on April 15, 2001. David was an Executive Board member of the Oklahoma Museum of Telephone History. In his spare time he enjoyed fishing, hunting, golfing and the anything outdoors. David loved his grandchildren and helping others. The most important thing he taught others about life was to serve, devoting his life to help others. Mr. Wooster is survived by: Daughter: Kimberly Crilly and husband Sam of Oklahoma City, Oklahoma Step-daughters: Kim Doherty and husband Jeff Amanda Toups and husband Shane Emily O’Bryan and husband Sean Sister: Mary Gaye Tison 11 grandchildren: Skyler Wooster, Kaleb and Aubrey, Brendan, Greyson, Hayden, Allie, Jaycee, Jenah, Jake and Brogan father-in-law and mother-in-law: Charles and Julie Lampkin brother and sister in-laws: Steve and Cindy Lower Jim and Dena Duncan Randy Montgomery A host of nieces, nephews, family, and friends. Mr. Wooster was preceded in death by: His wife: Lisa Parents: Jim and Roberta Wooster Brother: Jimmy John Wooster Sister: Judy Fredrick Funeral services are scheduled for Wednesday, November 25, 2015 at 10:00 a.m. in the Kingsview Church, 14200 S. May Ave., Oklahoma City, Oklahoma. You may send a condolence to the family at www.woosterfuneralhomes.com. In lieu of flowers, the family requests donations be made to the American Cancer Society.

The family of David Dean Wooster created this Life Tributes page to make it easy to share your memories.