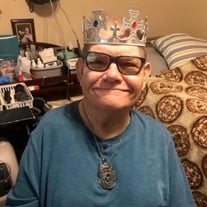 David Wayne Butler, of Pauls Valley, Oklahoma, entered this life on December 14, 1948 in Royal Oaks, Michigan, the second of six children, to Wesley D. and Millie Mae Butler. When David was 13 months old, he suffered right side paralysis as a result of the German Measles, leaving his little body ravaged and riddled with a multitude of physical impairments and developmental delays. David was never expected to walk, talk, nor enjoy a long life, but he continued to meet and surpass every milestone considered unattainable for a boy of his circumstance. David had a warrior spirit that pulled him through a lifetime of obstacles and setbacks up until the very end. He fought tirelessly, for over 70 years, to stay in this world and enjoy the life he so loved. David was a man of simple pleasures, but a simple man; he was not. David had a wry, keen sense of humor and was one of those people who could communicate with his deep, soulful eyes. He was extraordinarily well-mannered and polite and took great pride in being considered a gentleman by all those whom he came to know. He had a genuine character and a curious mind, always eager to learn of and ponder about the new places that he might “take a voyage to”. David enjoyed the outdoors and fishing was one of his favorite pastimes, especially with his brother Eddie. He loved everything about fishing, from the first cast to the patient pause. The pause may have been his favorite, as he would sing a special song to entice the fish to take his bait. Many fond memories of David, fishing pole in hand, are treasured by his friends and family. He was a tremendously patriotic man and loved all things America, including the flag and the fourth of July celebrations. David was also an avid Sooner fan and never missed an opportunity to display his Sooner Pride. Watching OU football, WWE and John Wayne movies with his good buddy John, was a true and simple delight for him. David also enjoyed rodeos, dances and visiting with family and his staff. He loved attending church and really let his light shine while praising the Lord with his tambourine. Davids life was much different than others, as he was never physically nor mentally able to participate in most of the things that we take for granted. However, David loved everything about his life and everyone in it. David entered the life everlasting on September 10, 2021 at Mercy Hospital in Oklahoma City after a long and courageous battle. David is survived by his mother, Millie Mae Lunsford of Pauls Valley, Sisters: Melinda Filbeck (Jim) of Ada, Oklahoma, Paula Kay Harrison (Steve) of Nowata, Oklahoma, Deborah White (Mike) of Pauls Valley, Oklahoma, Brother James (Eddie) Butler (Myrna) of Stockton, California and nieces, nephews (great and great great), too numerous to list. David will be reunited with his Father, Wesley D. Butler, his little brother, Jody Dean Butler and many Aunts, Uncles and cousins at Heavens Pearly Gates. He will finally be able to run, talk and enjoy all that he was not able to here on earth. The family would like to express their sincerest appreciation and warmest affection for all of the staff of SunDance of Oklahoma and all who interacted with David throughout his life in Pauls Valley. May God Bless You All. Funeral services are scheduled for 11:00 a.m., Thursday, September 16 at the Wooster Funeral Home Chapel with Pastor Neal Barlow and Chaplain Harry Smith officiating. Interment will be in the East Hill Cemetery in Roff, Oklahoma under the direction of Wooster Funeral Home. You may send a condolence to the family at www.woosterfuneralhomes.com.

David Wayne Butler, of Pauls Valley, Oklahoma, entered this life on December 14, 1948 in Royal Oaks, Michigan, the second of six children, to Wesley D. and Millie Mae Butler. When David was 13 months old, he suffered right side paralysis as... View Obituary & Service Information

The family of David Butler created this Life Tributes page to make it easy to share your memories.