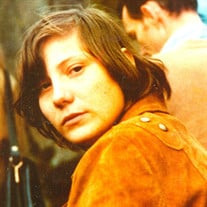 Daren Denita Kelly, Wife, Mother, Grandmother and Warrior. Daren Denita Kelly, age 61, was born June 30, 1956 in Pauls Valley, Ok to Arlis & Roberta Cowling Sudbury and passed away Saturday, August 26, 2017 at OU Medical Center Hospital after a battle with lung cancer. Daren is survived by her husband, James, father, Arlis Sudbury, brother, Jimmy Fowler, and three children: Antony Kelly, Terrence Kelly, and Brandi Kelly Copeland. She is also leaving behind seven grandchildren, Ashley Kelly, Hailey Kelly, Avery Kelly, Brandon Kelly, Bryan Byler Jr., Karsten Copeland and Kaia Copeland. Daren was preceded in death by her mother, Roberta Sudbury, and brother, Michael Sudbury. Daren is an Army veteran volunteering during the Vietnam era. She grew up in southern Oklahoma, the third child of Arlis and Roberta Sudbury. As a child, Daren had the privilege of traveling around the world with her family, living in Malta, Great Britain, and Algiers, to name a few. Daren graduated high school in Davis, Oklahoma, completed her bachelor degree from OU. She went to basic training at Ft. Jackson, South Carolina and MP training at Ft. Gordon, Georgia. She was then stationed in Pirmasens, Germany. While in the service in Germany she met James and they were married six months later. Following this was their first child, and subsequent honorable discharge from the military to raise their family in Oklahoma. A few years later came their second child, and then their third, completing their family and planting their roots on the family property in Wynnewood. Daren retired from the Oklahoma Department of Human Services in 2008, after working to reunite families in the Caddo and Garvin County areas. She was dedicated to helping others in crisis, giving back to the community, and instilling hope in all. Following in her mother’s footsteps, Daren joined the Oklahoma Order of the Eastern Stars. During her time in O.E.S. with Pauls Valley Chapter #185, she served many stations including Worthy Matron, Ruth, and most recently as Chapter Secretary. Most of all she is remembered as a woman of great faith. Throughout her sickness she could be quoted as saying, ‘this is not a curse but rather a blessing.’ Her faith inspired others around her, and will continue to carry out her legacy. Funeral services will be held at Walker Baptist Church in Wynnewood, Oklahoma at 1:00 p.m. on Monday, August 28, 2017 beginning with O.E.S. service and officiated by Bro. Mike Muse. Interment will be in the Oaklawn Cemetery in Wynnewood, OK. Services are under the direction of Wooster Funeral Home. You may send a condolence to the family at www.woosterfuneralhomes.com

The family of Daren Denita Kelly created this Life Tributes page to make it easy to share your memories.