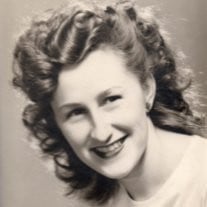 Daphne Joan Dineley, 87, passed away peacefully at her daughter and son-in-law’s home on January 5, 2014. Daphne, also affectionately known by many as “Momma Jo” or simply “Jo”, was born in Bloomington, Nebraska on December 11, 1926. She and her family moved from Nebraska to Milton, California when she was a young child, where she lived until she married her husband Jack on August 9, 1947. They lived in Big Creek, California and then in Visalia, California until they moved to Tehachapi, California in 1961, where they raised their two children, Tom and Terrie. They grew to love their community and made many wonderful friends. They spent many happy years there until Jack passed away in 2008 and Jo’s health declined. In 2012 Jo moved to Pauls Valley, Oklahoma to be cared for by her daughter Terrie. Although she missed her friends in Tehachapi, Jo learned to love Oklahoma as well. She soon realized that people in Oklahoma were very friendly and kind-hearted, and that she loved spending time with and being cared for by her loved ones. She enjoyed country living to the fullest and found that one of her favorite past-times was to watch the ducks on the pond or the brilliantly red cardinal birds which resided right outside of her new home. She is survived by her son Tom Dineley and his wife Jan; daughter Terrie Gary and son-in-law David; her brother Max Dunn and Sister Clare Moran; Brother-in-law Don Dineley and his wife Joyce; Grandchildren Danielle, Grant and his wife Ashley, Sam and his wife Rufi, Matt, Chrystal and her husband Austin, Dennis, and Andy and his wife Leah. She also leaves behind eight great-grandchildren, one great-great-grandchild and many nieces and nephews. Jo was an excellent cook, known for her Sunday dinners and homemade pies. She was a wonderful wife, mother and grandmother and was totally devoted to her family. Jo was known for her warm smile and friendly personality and her bright red hair which was always perfectly styled. She loved playing bingo, but most of all loved her family and friends. The Dineley family wishes to extend their heartfelt thanks to Ramona, Holly, Marsha and Christy of Lifecare Hospice of Oklahoma for their loving care of Jo and for the family guidance and support they provided. Also, to Dr. Dennis Whitehouse for his diligent efforts to ensure excellent care and treatment was provided. A final thank you is extended to the Wooster Funeral Home staff of Pauls Valley, Oklahoma for handling all arrangements. You may send a condolence to the family at www.woosterfuneralhomes.com.

The family of Daphne Joan Dineley created this Life Tributes page to make it easy to share your memories.

Daphne Joan Dineley, 87, passed away peacefully at her daughter...