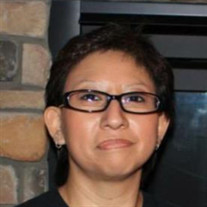 Daphana Elaine (Noah) Cook Daphana Elaine Cook of Norman, Oklahoma passed from this life at the young age of 51 in the early morning hours of August 17, 2020 at Norman Regional Hospital. Daphana (Dee) Cook was born on December 6, 1968 in Talihina, OK to the late Rose Marie Noah. Dee grew up in Broken Bow, Oklahoma graduating from Broken Bow high school in 1987. While in high school, Dee found her passion for nursing and began taking classes at Kiamichi Technology School. She continued on after graduating to earn her LPN certificate. In 1990, Dee moved to Norman, Oklahoma to live, work and attend school. She eventually met the love of her life, Robbie Lynn Cook. They married in Oklahoma City on April 20, 1994 and welcomed daughter Julie Nicole in December of 1996. Dee and Rob shared a love of comedy. They enjoyed attending and watching many comedy shows. Dee worked at a nursing home, and Integris Southwest Hospital in Oklahoma City for 26 years before moving closer to home to work at Norman Regional Hospital until her death. Dee loved her life's work especially enjoying the fast pace and energy of ER nursing. When not working, Dee loved shopping, being with family and bringing her Aunt Ella (Nana) Going to come stay with her. She also loved spending time with her cousin’s daughter Kendyn, who held a special place in her heart. Dee loved the Oklahoma Sooners and her drink Dr. Pepper. She always had a drink in one hand and a can in the other so that she was never without. We will always remember her last smile that came after her cousin Randon gave her a sip of Dr. Pepper. Dee is survived by her Aunt Ella (Nana) Going of Broken Bow, Oklahoma, and many cousins scattered throughout Oklahoma, Texas and Florida. She is also survived by her brother-in-law Richard Cook of Edwardsville, Kansas; Steve Cook and wife Phyllis of Elmore City, Oklahoma and sister-in-law Laura Dudley of Checotah, Oklahoma. Dee was preceded in death by her husband Robbie Lynn Cook, and daughter Julie Nicole Cook. Dee was also preceded in death by her grandparents Wilson and Nora (McGee) Lewis, her mother Rose Marie Noah, Aunts Vera, Sarah, Marie, and Isabel . Uncles David and Emerson Lewis.

Daphana Elaine (Noah) Cook Daphana Elaine Cook of Norman, Oklahoma passed from this life at the young age of 51 in the early morning hours of August 17, 2020 at Norman Regional Hospital. Daphana (Dee) Cook was born on December 6, 1968 in... View Obituary & Service Information

The family of Daphana "Dee" Elaine Cook created this Life Tributes page to make it easy to share your memories.