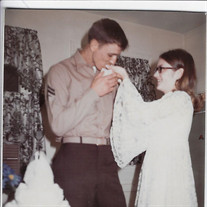 DANNY LEROY ALEXANDER RITA LEOLA JEAN ALEXANDER Memorial services for both Danny and Rita Alexander will be held on Thursday, January 5, 2017 at 2:00 p.m. at Wooster Funeral Home Chapel in Pauls Valley, OK. Danny was born the fourth of seven children on October 28, 1948 in Pauls Valley, OK to Leroy and Jessie (Miller) Alexander. He passed from this life on December 31, 2016 in Lexington, OK at the age of 68. Danny grew up in the Whitebead area and attended school at Whitebead and Pauls Valley, after which he joined the U.S. Marine Corp. On completion of basic training he was sent for a tour of duty in Vietnam where he was a heavy equipment operator. He carried this training with him throughout his life as he was a heavy equipment mechanic and operator. While home on leave, he met Rita Leola Jean Martin. They were married in the Trinity Baptist Church in Pauls Valley, OK and were married 44 years. Rita was born to Raymond and Mamie Pauline Martin on December 18, 1951 in Wynnewood, OK. She preceded Danny in death on February 8, 2016. To this union were born four children, three sons and one daughter. In addition to his wife, Danny was preceded in death by his grandparents, Willie A. and Estella Miller, Janie Alexander and John Alexander; his parents Leroy and Jessie Alexander; three sons, an infant baby boy, Jason Alexander and Martin Alexander; and his brother Larry Alexander. Surviving family includes his daughter Molly Jean Pyle and husband Tom of Elmore City, OK; three grandchildren Toby, Owan and Mable Pyle; five sisters Peggy Jenkins and husband George of Sapulpa, OK, Nancy Tucker and husband Dalton and Marilyn Looney of Pauls Valley, OK, Debra Hardy and husband Scott and Robin Caldwell of Elmore City, OK. Memorial services will be under the direction of Wooster Funeral Home & Cremation Services. Condolences may be sent to the family at www.woosterfuneralhomes.com

The family of Danny Leroy Alexander created this Life Tributes page to make it easy to share your memories.