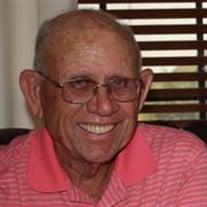 Curtis Dwight Hayes, age 83, passed away peacefully on May 11, 2020 at Oklahoma City, OK. He was born July 4, 1936, in Parks, OK to Lena Gladys McCurley Hayes and Joseph Clarence Hayes, Sr. He attended schools in Parks, Pauls Valley, Elmore City, and graduated from Lindsay High School where he became Lindsay's first male All-State basketball player. After graduation, he began a career at Rural Electric Cooperative, where he worked for 42 years until he retired. He married Phyllis Ann Tomlinson on December 7, 1957, in Gainesville, TX. They shared a wonderful life together for 62 years in Lindsay, OK where they raised four children: Janet, Lisa, Connie, and Curt. In his younger years, Curtis enjoyed playing sports, especially basketball, baseball, and semi-pro fastpitch softball. He coached many American Legion and little league baseball teams. He also refereed at basketball games. He very rarely missed one of his grandchildren’s school or sporting events. Curtis was an avid OU women's basketball fan. He loved Sherri Coale and was especially tickled when she sent him a card for his 80th birthday. He also enjoyed fishing and putting puzzles together. He spent many an afternoon playing Moon and dominoes with his buddies, "the old codgers", as he lovingly called them. If you knew him, you knew he had a funny nickname for many people, but most were terms of endearment. His family thought he was busier after he retired than when he was working as he loved to work at the church, have fun with Wayne Yandell, help Bob Faulkenberry with the garden and tend to the fields. He was always on the go. Curtis was a longtime member of the First Christian Church in Lindsay, OK. There, he served as a deacon, board member, treasurer, and groundskeeper. His faith and his church family were very important to him. Lindsay Schools were also very important to him. He loved the Leopards and spent many hours watching basketball and softball with his buddies. He served on the Lindsay School Board from 1980 until 1991. He also was a proud supporter of the Bethel Lady Wildcats softball program, where he watched his son-in-law coach many successful teams. Curtis is lovingly remembered by his wife, Phyllis Hayes, his children, Janet Block and husband Tommy, Lisa Taylor and husband David, Connie Badertscher and husband Tommy, and Curt Hayes and wife Gina. Pawpaw's memory will also be cherished by his grandchildren, Brianne Bray and husband Jeff, Shelby Linford and husband Mike, Erin Mainka and husband Justin, Tyler Block, Cole Hayes, Parker Hayes, Steven Block, and Gregory Block. He was adored by his great-grandchildren, Easton Bray, Annaston Mainka, Knox Linford, Austin and Jackson Block. He is also survived by his siblings Mona Endler and husband Ron, Alene McCaskill, Joe Hayes and wife Ronna, Gale Hayes, and Dale Hayes, many special nieces and nephews, as well as numerous other family members and friends. We will all miss his kind spirit and gentle demeanor tremendously. Curtis was preceded in death by his parents, Jake and Gladys Hayes, his father and mother-in-law, Trig and Anna Tomlinson, his brothers-in-law, Sam McCaskill and Bill Tomlinson, and sister-in-law, Judy Johnson. His family appreciates the love and care Curtis received at Autumn Leaves Memory Care Center where he resided the past two years. There will be a viewing on Wednesday, May 13, 2020 at Wooster Funeral Home in Elmore City, OK, from 9:00 am to 5:00. There will be a celebration of Curtis’s life at a later date. In lieu of flowers, Curtis's family suggests donations be made to Lindsay First Christian Church Memorial Fund at 209 SW 4th St, Lindsay, OK 73052. Since we are unable to have a funeral service at this time, we, the family, request you go out and help someone or do something kind for someone else in his honor. Curtis would love that.

The family of Curtis Hayes created this Life Tributes page to make it easy to share your memories.