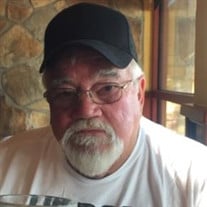 CLINTON ROLLER Harold Clinton Roller of Elmore City, Oklahoma was born to Henry C. and Catherine (Blackwood) Roller on December 22, 1945 and passed from this life on November 21, 2018 in Elmore City, Oklahoma at the age of 72 years. Clinton grew up and attended school at Elmore City, Oklahoma. Clinton and his wife Janie were married on December 18, 1969. He worked in the oil field starting as a roughneck, working his way up to a consultant. Clinton retired in 2015. He was a member of the First Baptist Church. In his spare time, he enjoyed hunting, horse racing, OU football games, sports, and gardening. The highlights of his life were his grandkids and whatever they wanted to do. Mr. Roller is survived by: 2 daughters: Stefanie Wallace and her husband Jeremy of Lindsay, Texas Christy Howard of Elmore City, Oklahoma 6 grandchildren: Ashley Howard, Dylon Howard, Cara Howard, Elizabeth Wallace, Joshua Wallace and Clinton Wallace 2 great-grandchildren: Tayha Howard and Riley Casey Brothers: Jerry Roller of Wayne, Oklahoma Randy Roller and Nanette of Norman, Oklahoma 2 sisters: Beverley Rankin of Blanchard, Oklahoma Phyllis Roller of Dunnellon, Florida Mr. Roller was preceded in death by: Wife: Janie Roller in 2006 Son: Leonard Wayne Roller Parents: Henry and Catherine Roller Funeral services are scheduled for Monday, November 26, 2018 at 2:00 p.m. in the Elmore City First Baptist Church with Joe Terrell officiating. Services are under the direction of Wooster Funeral Home. You may send a condolence to the family at www.woosterfuneralhomes.com.

The family of Clinton Roller created this Life Tributes page to make it easy to share your memories.