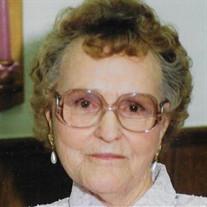 Cleo Arnett Bray was born on March 28, 1920 in Vanoss, Oklahoma to Gardy and Pauline (Holmes) Arnett and passed from this life on Sunday, February 15, 2015 at the age of 94 years. Mrs. Bray spent her childhood days in Pauls Valley, Oklahoma in the Whitebead community and later lived in the Satterwhite area, returning to the Whitebead community in 1990. She was a faithful Christian woman and was a member of Satterwhite Baptist Church. Her Christian values were reflected in the most important lessons she taught her children. She frequently reminded them to always do their best and “if you can’t do it right, don’t do it”. She wanted them to understand the importance of always paying your bills on time. “If unable to meet your obligations, go down one side of the street paying those you can and up the other side of the street notifying those you aren’t able to pay”. She was never afraid of hard work and had worked in the broomcorn and cotton fields. Mrs. Bray was a homemaker and stay-at-home mom until her children finished school. She later worked for Stromberg-Carlson Manufacturing Company in Gene Autry, Oklahoma. Spending time with her family was the highlight of her life. In her quiet moments she was comforted when sewing, crocheting and doing various craft projects. Mrs. Bray was preceded in death by her three husbands, Jesse Harris, Furman Horn and Cletus Bray. She was also preceded in death by her parents Gardy and Pauline Arnett, brothers Eugene and Grover Brown, sisters Alva Turner and Lorene Clark, son Jessie Harris and daughter Marie Clark. Mrs. Bray is survived by her son Charles Harris and wife Betty of Whitebead, Oklahoma, daughters Mary Ann Turner and husband Frank of Kingston, Oklahoma and Ruth Harmon of Davis, Oklahoma, sister Virginia Wages of Pauls Valley, Oklahoma, step-son Sam Bray and wife Ann of Whitebead, Oklahoma, step-daughters Mary Cosner and husband Jack of Florida, Nita Trammel and husband Simpson of Arkansas and Darlene Keene of Arkansas, numerous grandchildren, great-grandchildren and great-great-grandchildren. Funeral services are scheduled for Mrs. Bray on Friday, February 20, 2015 at 2:00 p.m. in the Wooster Funeral Chapel in Pauls Valley, Oklahoma with Reverend Charles Dial officiating. Interment will be in the Mt. Olivet cemetery under the direction of Wooster Funeral Home. Visitation will be normal business hours 9:00 to 4:30 on Wednesday, Thursday and Friday. Condolences to the family may be sent to www.woosterfuneralhomes.com.

Cleo Arnett Bray was born on March 28, 1920 in Vanoss, Oklahoma to Gardy and Pauline (Holmes) Arnett and passed from this life on Sunday, February 15, 2015 at the age of 94 years. Mrs. Bray spent her childhood days in Pauls Valley, Oklahoma... View Obituary & Service Information

The family of Cleo Arnett Bray created this Life Tributes page to make it easy to share your memories.