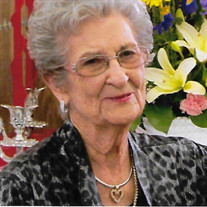 Mae Christeen Paul Swinney was born into this world on March 21, 1925 to William I. (Pike) Paul Sr. and Willie Kate Bragg Paul. She left this world on September 18, 2020. Christeen’s father Pike Paul was on the original Dawes Rolls and her great, great grandfather was Smith Paul, founder of Pauls Valley. Christeen married Victor (Vic) Swinney, son of long time Garvin County Sheriff Claude Swinney. Vic was a Decorated WWII paratrooper and former POW. They were married for 52 happy years. She and Vic were very active in the Oklahoma Prisoner of War Association throughout their lives. While making Garvin county their primary home they did live in Venezuela for nearly two decades while Vic built and managed a major refinery in Caracas. After returning to Garvin County they settled in the Elmore City area and ranched in the far southwest area of the County. Christeen also worked as a realtor throughout Garvin County. Prior to her marriage to Vic, Christeen work as an administrative assistant to several oil companies and would tell numerous funny stories of early Garvin County oil fields. She had a tremendous respect for both family history, Chickasaw heritage and hope for the coming generations. An active bridge player she hosted and participated with bridge groups throughout Garvin and surrounding counties. She was also known for the fabulous home Christmas decorations turning her home into a true wonderland of celebration. Christeen was proceeded in death by her parents and brothers William I. (Bill) Paul, Jr. and Jimmy Stewart Paul of Elmore City. Also proceeding her in death was niece Bileta Kaye Paul Burns, and nephews Jimmy Lee Paul, Michael Stewart (Mike) Paul, and Jackie Dale Paul. Surviving nephews and nieces include William I. (Bill) Paul III of Stratford, Oklahoma, Jimmie Carol Paul Blaker of Richmond, Texas, Tommy Allen Paul of Elmore City and Cynthia Ann (Cindy) Paul Stubblefield of Oklahoma City. There are also numerous great nieces and nephews and great great nephews and nieces who knew her as a matriarch of the family. Funeral Services are scheduled for 10:00 a.m. Monday, September 21, 2020 in the Wooster Funeral Home Chapel in Pauls Valley with Joe Terrell officiating. Interment will be in the Elmore City Cemetery under the direction of Wooster Funeral Home. You may leave a condolence to the family at www.woosterfuneralhomes.com Visitation will be 1-5 Saturday and 1-5 Sunday

Mae Christeen Paul Swinney was born into this world on March 21, 1925 to William I. (Pike) Paul Sr. and Willie Kate Bragg Paul. She left this world on September 18, 2020. Christeen&#8217;s father Pike Paul was on the original Dawes Rolls... View Obituary & Service Information

The family of Christeen Swinney created this Life Tributes page to make it easy to share your memories.

Mae Christeen Paul Swinney was born into this world on March...