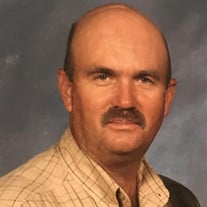 Charles Wendell (Chip) Howard II went to be with the Lord on December 16, 2017. He was born to Charles and Linda Howard on December 8, 1964. Chip lived in many places during this life but called Pauls Valley, Oklahoma his home. It was there that he met his high school sweetheart and love of his life, Nancy Smith. Chip graduated from Pauls Valley High School in 1983 and went to Oklahoma State University to study agricultural economics. He graduated with a Bachelor of Science degree in December of 1989. Chip and Nancy went to OSU together and were married on August 6, 1988. They began a life as a married couple in Stillwater and soon moved to Massachusetts, where Chip worked as a cranberry farmer. He always had a love for the outdoors and continued to farm throughout his life. Chip and Nancy welcomed their son, Caleb into the world in Wynnewood, Oklahoma and then their daughter, Bethany in Elmore City, Oklahoma, where he lived the remainder of his life. Chip was a giver and a provider to many people. He opened his heart and home to anyone who needed it over the years. He was a persevering hard worker and an entrepreneur throughout his life. He started rural sanitation services in 1993 and eventually sold that business to begin Blue Moose portables and ACT containers. He also enjoyed picking pecans, baling hay, and maintaining his cattle and honeybees. He was a member of the Garvin County Fair Board where he served as president the last few years. Chip was a also member of the First Baptist Church of Elmore City. Chip loved his family more than anything. He is survived by his wife Nancy of 29 ½ years; his son and daughter-in-law Caleb Anderson and Destiny Noel Howard; his daughter Bethany Jo Howard; his parents Charles and Becky Howard and Linda and Jim Edwards; his brother Jared Howard and his niece Jordan; his step-brother Scott Woods; his step brother James and wife Mikal Edwards and their children; his step sister Janet White and husband Keith White and their sons; his mother and father-in-law L.D. and Sammy Smith; his brother and sister-in-law Max and Sandra McKnight and their children. In addition, Chip is survived by the many Blue Moose and ACT employees that he cared for as if they were his own family.

Charles Wendell (Chip) Howard II went to be with the Lord on December 16, 2017. He was born to Charles and Linda Howard on December 8, 1964. Chip lived in many places during this life but called Pauls Valley, Oklahoma his home. It was there... View Obituary & Service Information

The family of Chip Howard created this Life Tributes page to make it easy to share your memories.

Charles Wendell (Chip) Howard II went to be with the Lord on...