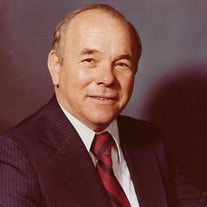 Charles Webber Vann of Pauls Valley, Oklahoma was born to William Hampton and Nancy Mahala (Webber) Vann on November 10, 1928 in Woodville, Oklahoma and passed from this life on April 13, 2018 in Pauls Valley, Oklahoma at the age of 89 years. Charles grew up in Woodville, Oklahoma. He moved to Kingston, Oklahoma when Lake Texoma was under construction. Charles graduated from Kingston High School and later attended East Central University and Oklahoma Baptist University. He served his country in the U. S. Air Force and the U. S. Army during the post WW II era and Korean conflict. After graduating from East Central University, Charles was the band director at Latta, Oklahoma and Pauls Valley, Oklahoma. Charles later served as an Oklahoma State Representative and Senator. He was a Chickasaw Elder and a member of the Chickasaw Warrior Society. In his spare time, he enjoyed fishing, working in the yard and spending time with friends and family. Mr. Vann is survived by: Son: Charles William Bill Vann and his wife Tracy of Coalgate, OK. Grandson: Bryson Vann of Ada, OK Nephews: Lewis Everett and wife Stephenie of Vanoss, OK, and David and Pat Everett of Sanger, TX Mr. Vann was preceded in death by: His wife: Erma Jean Vann on February 17, 2017 His sister: Billie Jeniece Everett and his parents W. H. Vann and Nancy Mahala Vann. Funeral services are scheduled for Wednesday, April 18, 2018 at 2:00 p.m. in the First United Methodist Church officiating. Interment will be in the Mt. Olivet Cemetery. Services are under the direction of Wooster Funeral Home. You may send a condolence to the family at www.woosterfuneralhomes.com. The family requests memorials be made to P.A.W.S., 300 East Airport Industrial Road, Pauls Valley, OK 73075, the Salvation Army, 1001 N. Penn, Oklahoma City, OK 73017 or the Chickasaw Foundation Scholarships, P.O. Box 1726, Ada, OK 74820.

The family of Charles Vann created this Life Tributes page to make it easy to share your memories.