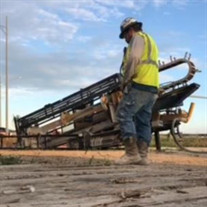 Chad Eric Airington of Elmore City, Oklahoma was born to Leroy Airington and Kim (Caldwell) Williams on July 23, 1978, in Duncan, Oklahoma and passed from this life on January 26, 2022, at the age of 43 years. Chad grew up and attended school in Fox, Oklahoma. After high school, he worked at the Dollar General warehouse then made his way to Wal-Mart DC. At that time, he and his future wife, Amanda Paul, started to date. On September 6, 2002, they married in Foster, Oklahoma. Chad and Amanda made their home in Elmore City, Oklahoma. Later in life, Chad changed careers to the oil field, which he loved. He worked at Forum as a loader then he got his CDL and became a knuckle boom operator. From there he moved to Big Iron when Forum closed. His calling then went to being a truck driver and locater on a directional drilling crew at Bradford Boring in Chickasha, Oklahoma. Chad was a hard worker and always provided for his family. His goal in life was to always make sure his family was taken care of and to make sure his place of employment knew they could count on him. Chad was a man of few words to most but if he knew you, he would visit for hours. If he were not speaking about Amanda and the kids, he would talk on and on about work. Chad loved to tell stories of his childhood fishing trips to Texoma with his dad. He loved to aggravate all the extra kids who were at their home when he was in from work. When he wasn’t working, he and Amanda spent countless hours traveling with their sons, Brysen and Blake to sports activities and other events. Chad not only loved his children and time spent with them, but other’s children as well. In his spare time, he enjoyed fishing and hunting. The highlight of his life was his family. He will be missed by so many. Chad is survived by: Wife: Amanda of the home Sons: Brysen and Blake of the home Mother: Kim Williams and husband Billy of Duncan, Oklahoma Sister: Tiffannie Airington of Ratliff City, Oklahoma 2 nieces: Gabrielle Airington and Kattrinna Alkire Chad was preceded in death by his father, Leroy Airington Memorial services are scheduled for 11:00 a.m., Monday, January 31, 2022, at the Elmore City Cemetery with Joe Terrell officiating. You may send condolences to the family at www.woosterfuneralhomes.com.

Chad Eric Airington of Elmore City, Oklahoma was born to Leroy Airington and Kim (Caldwell) Williams on July 23, 1978, in Duncan, Oklahoma and passed from this life on January 26, 2022, at the age of 43 years. Chad grew up and attended school... View Obituary & Service Information

The family of Chad Airington created this Life Tributes page to make it easy to share your memories.