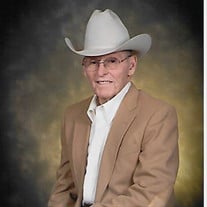 Buddy Underwood of Wynnewood, Oklahoma was born to Hollis and Pearl (McNeill) Underwood on July 21, 1934, in Elmore City, Oklahoma entered the gates of heaven on April 4, 2022, at the age of 87. Buddy grew up and attended school at Wynnewood, Oklahoma, graduating in 1952. After graduation, he served in the U. S. Army from 1957 to 1959. On November 20. 1959, Buddy married the love of his life, Sue Martin in Wynnewood. Buddy was a member of the First United Methodist Church in Wynnewood from an early age. He worked for Kerr McGee Refinery for thirty-two years, retiring in 1995. What started out as just a passion to heal cut horses became one of Buddy’s greatest accomplishments on this earth, which became the establishment of Underwood Horse Medicine, a worldwide company. The recipe was passed on from his father and he has since passed it onto his children. His love for animals will live on in the hearts of his family as we continue to meet the high standards that have been set before us. We hope he can look down from heaven and be proud of the company that he built. Buddy will be remembered as a man of many qualities; his most memorable was his unrelenting love for horses. He was also a man who was devoted to his family, had an unending love for animals, and was loved by many. We rejoice in the fact that he is no longer in pain and suffering on this earth and will be walking the street of glory in heaven with Jesus. Mr. Underwood is survived by: His loving wife of sixty-three years: Sue Underwood Son: Mitch Underwood and wife Dana of Marlow, Oklahoma Daughter: Patsy Stubblefield and husband Rick of Wynnewood, Oklahoma Grandsons: Brandon Underwood from Muenster, Texas and Ross Underwood of Wynnewood, Oklahoma Sisters: Dorothy Dunn from Wynnewood, Oklahoma; Francis Whatley from Athens, Texas Nephews and nieces: Jimmy, Randy, Connie, Vickie, Nancy, Arlene, Sue Lynn, Terri, and Natalie Mr. Underwood was preceded in death by: Parents: Hollis and Pearl Underwood Sister and brother-in-law: Averene and Warren Walker Brother-in-laws: Arlie Whatley and Terrell Dunn The family would like to extend a special thank you to CrossTimbers Hospice for their loving care. The family asks in lieu of flowers that a donation be made in Buddy’s name to the First United Methodist Church in Wynnewood, Oklahoma. The family will receive friends and family on Thursday from 5-7 p.m. at the funeral home. Funeral services are scheduled for 2:00 p.m., Friday, April 8, 2022, at the First United Methodist Church in Wynnewood, Oklahoma with Curtis Stubblefield and Chaplin Matt Benedict officiating. Interment will be in the Elmore City Cemetery under the direction of Wooster Funeral Home. You may send a condolence to the family at www.woosterfuneralhomes.com. The services will be live streamed on Wooster Funeral Home's Facebook site.

Buddy Underwood of Wynnewood, Oklahoma was born to Hollis and Pearl (McNeill) Underwood on July 21, 1934, in Elmore City, Oklahoma entered the gates of heaven on April 4, 2022, at the age of 87. Buddy grew up and attended school at Wynnewood,... View Obituary & Service Information

The family of Buddy Underwood created this Life Tributes page to make it easy to share your memories.

Buddy Underwood of Wynnewood, Oklahoma was born to Hollis and...