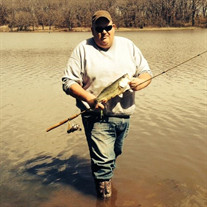 Brian Mitchell “Dusty” Strader of Pauls Valley, Oklahoma was born to Mitchell Thomas and Jacque Sue (Emerson) Strader on August 16, 1972 in Kansas City, Kansas and passed from this life on April 14, 2016 near Pauls Valley, Oklahoma at the age of 43 years. Dusty grew up and attended school in Osawatomie, Kansas. After graduating high school, he pursued a career in iron work, becoming an apprentice in 1990 and was promoted to journeyman in 1993. He was a member of the Ironworkers Local 433. He worked in the Kansas City area from 1990 to 2005 and then moved to Las Vegas where he continued working until 2011. In 2013, Dusty relocated to Pauls Valley, Oklahoma. He began cattle ranching in 2014 along with his sister and brother-in-law. In his spare time he enjoyed fishing, hunting and cooking. The highlights of his life were his two nephews, his family and his dogs, Precious and Layla. He will forever be remembered for always being there to lend a helping hand to others in need. Surviving family members include his parents, Mitchell and Jacque Strader of Pauls Valley, Oklahoma; his sister Hollee Carson and husband Casey of Wayne, Oklahoma; two nephews Tyler Burns of McPherson, Kansas and Cross Carson of Wayne, Oklahoma and his best friend Jamel Ramzie of Las Vegas, Nevada as well as a host of many friends. Mr. Strader was preceded in death by: grandfather Buford Mitchell “Dusty” Strader, and grandmother Wanda Lee Strader and Ila “Mommo” Emerson Collins Memorial services are scheduled for Monday, April 18, 2016 at 2:00 p.m at the Higher Ground Church with Rev. Joel Downing officiating. You may send your condolences to the familyat www.woosterfuneralhomes.com. Memorial donations in lieu of flowers may be made in Brian “Dusty” Strader’s to the Higher Ground Church, P.O. Box 365, Pauls Valley, Oklahoma 73075.

The family of Brian Mitchell "Dusty" Strader created this Life Tributes page to make it easy to share your memories.