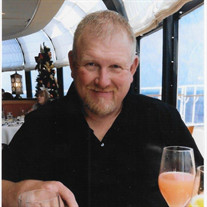 Brad Allen Meadows of Elmore City, Oklahoma was born on June 2, 1971, in Pauls Valley, Oklahoma and passed from this life on October 7, 2021, in Norman, Oklahoma at the age of 50 years. Brad grew up and attended school in Elmore City, graduating from Elmore City High School in 1990. In April of 2005, Brad married the love of his life, Cherri Wright in Ardmore, Oklahoma. Together they made their home in Elmore City. Brad and Cherri were blessed with a beautiful baby girl, Daisy Cabela on October 5, 2005. Daisy was the light of Brad’s life. He always had a special way with children. They instantly became best friends with the “Gentle Giant” as soon as they met him. That was the case for all others who had the pleasure of knowing him. Brad worked as a transporter in the oil field for many years. He was volunteer firefighter for the Katie Fire Department. In his spare time, Brad enjoyed fishing, mowing his lawn, woodworking, and OU football. He especially loved spending time with his family, anything involving Disney and celebrating Christmas. He was kind, thoughtful, and never met a stranger. To know Brad was to love him. We will miss him dearly. Brad is survived by: Wife: Cherri of the home Daughter: Daisy Meadows of the home Mother: Janyce Meadows of Elmore City, Oklahoma Brothers: Jamey Meadows and wife Sunny of Elmore City, Oklahoma Mark Meadows and wife Kim of Strang, Oklahoma A host of aunts, uncles, cousins, nieces, nephews, family, and friends. Brad was preceded in death by: Father: Red Meadows Grandparents: Thomas and Faye Chaney Grady and Velma Meadows Funeral services are scheduled for 2:00 p.m., Monday, October 11, 2021, at the First Baptist Church in Elmore City, Oklahoma with Rev. Brandon Henry officiating. Interment will be in the Elmore City Cemetery under the direction of Wooster Funeral Home. You may send a condolence to the family at www.woosterfuneralhomes.com.

Brad Allen Meadows of Elmore City, Oklahoma was born on June 2, 1971, in Pauls Valley, Oklahoma and passed from this life on October 7, 2021, in Norman, Oklahoma at the age of 50 years. Brad grew up and attended school in Elmore City, graduating... View Obituary & Service Information

The family of Brad Meadows created this Life Tributes page to make it easy to share your memories.