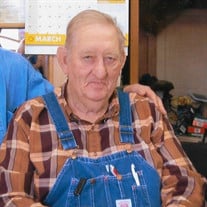 Bonney Ray Martin, 80, Wynnewood, OK died on September 8th, 2015. He owned Martin’s Fertilizer & Equipment in Wynnewood and Pauls Valley, was a farmer-stockman, and in the oil and gas business. He was the eighth of eleven children born to Eva Clo (Bean) Martin and James Fletcher Martin on October 8th, 1934 at Chigley, Oklahoma southeast of Wynnewood. He was the husband of Loreata Martin. Bonney achieved the rank of Eagle Scout, and was active in 4-H club where he held the office of president for Garvin County. He became a Christian as a teenager and was a member of the Methodist church. He was a member of Elmore City’s inaugural football team as a senior and graduated from Elmore City High School in 1953 where he earned his nickname “Bull”. He earned a football scholarship to Murray State College where he also was a member of their track team. He worked at KD Emert Well Servicing and Shebester, Toland & Reeves Well Servicing. He was employed at the Kerr-McGee refinery for ten years before beginning his own business in 1964. In 1954, Bonney married Loreata Mullens in the First United Methodist Church in Elmore City, Oklahoma. They had four children. Bonney was a devoted husband, wonderful father and friend to many. He is survived by his wife, Loreata, of the home, son, Stephen Martin and wife Patricia of Wynnewood, three daughters; Susie Tabor and husband Phillip, Wynnewood, Brenda Sechrist, Wynnewood, and Julie Rayburn and husband Travis, Ardmore. He is also survived by sisters, Sylvia Marks, Yorba Linda, CA, Nahoma Nation, Eugene, OR, Kathy Regier, Cordell, OK and brothers, James Martin, Wynnewood, OK, and Bob Martin, Oklahoma City, OK. He is also survived by his eight grandchildren: Diana Martin, Stephanie Stevenson, Sarah Martin, Phillip Tabor, Jr., Geoffrey Tabor, Aaron Sechrist, Jentri Rayburn, Drew Rayburn and one step-grandson, Shawn Sechrist. In addition he is survived by five great-grandchildren and two step-great grandchildren. He was preceded in death by his parents, Eva and Fletcher Martin, his brother, Vernon Martin, and sisters Vertie Griggs-Farley, Wanda Karr, Stella Duncan and Drusilla Pruitt. Casket Bearers will be Charles Knighton, James Lewis, Kevin Lewis, Travis Rayburn, Aaron Sechrist, Geoffrey Tabor, Phillip Tabor, and Phillip Tabor, Jr. Funeral services are scheduled for Friday, September 11, 2015 at 2:00 p.m. in the First United Methodist Church in Wynnewood, Oklahoma with Curtis Stubblefield officiating. Interment will be in the Elmore City Cemetery under the direction of Wooster Funeral Home. You may send a condolence to the family at www.woosterfuneralhomes.com.

Bonney Ray Martin, 80, Wynnewood, OK died on September 8th, 2015. He owned Martin&#8217;s Fertilizer & Equipment in Wynnewood and Pauls Valley, was a farmer-stockman, and in the oil and gas business. He was the eighth of eleven children born... View Obituary & Service Information

The family of Bonney Ray Martin created this Life Tributes page to make it easy to share your memories.