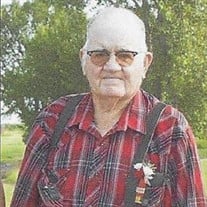 In loving Memory of Bobby (Bob) Wayne Warren Bobby (Bob) Wayne Warren was the only living child born to Ben and Grace (Cook) Warren in Brady, Oklahoma, on December 5, 1936. He passed away on September 3, 2016 at the age of 79 in Davis, OK. Bob grew up in Garvin County and graduated from Pernell Schools. On August 13, 1955, he married Betty Louise Courtney. They made their home in Elmore City where they raised five daughters. They shared every day together for 51 years until Betty’s passing in 2007. Bob was very proud of his “girls” and grandkids. He gave each of his grandchildren and great grandchildren a nickname. Bob and Betty loved to go to garage sales, where he acquired a knife collection that he proudly displayed. Most of all, he loved to visit with people and never met a stranger. You can almost hear him now saying, “What do you know, fella.” He loved traveling in his motor home to Nashville, Bluegrass festivals and especially proud that he drove to Alaska. Bob was a true jack-of-all-trades and enjoyed tinkering with tools, any type of machinery and gadgets, especially the gadgets in his motorhome. These talents served him well in his jobs as a truck driver, TV repairman, backhoe and grader operator. Bob owned and operated his own excavation company for many years. He had exceptional skills at home repairs and renovations and even built the home where he raised his family. He was a Mason and a member of the Wynnewood Lodge. He was recently recognized for 50 years of faithful service. He was preceded in death by his parents; his sister, Candace; his wife, Betty; his daughter, Denise Eidson; and his granddaughter, Jennifer Deemer. The family he leaves behind to cherish his memory include: Four Daughters: Brenda Warren of Elmore City, Carolyn Trammell and her husband Klint of Newcastle, OK, Linda Warren Rodriguez of Elmore City and Nancy Warren of Elmore City and, also, son-in-law, Oddie Eidson of Ada, OK; Four Grandchildren: Kyle Trammell and wife Kristy of Bridgecreek, OK , Melissa Hubbell and her husband Robert of Topeka, KS, Michael Eidson of Ada, OK, Lindsay Miller and her husband Dustin of Wynnewood, OK.; and Five Great-Grandchildren: Silas Trammell, Abel Trammell, Jacque Deemer, Daniel Deemer, and Nathan Deemer. His family is thankful for his exceptional caregivers, nurses, chaplains, and friends. Funeral services are scheduled for Wednesday, September 7, 2016 at 2:00 p.m. at the First Baptist Church in Elmore City, Oklahoma with interment at Elmore City Cemetery. In lieu of flowers, the family asks that you make a donation to Oklahoma Medical Research Foundation, 825 N. E. 13th Street, Oklahoma City, OK. 73104, www.omrf.org or other charities of your choice.

The family of Bobby Warren created this Life Tributes page to make it easy to share your memories.