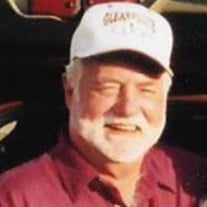 Billy Don Hamby of Pauls Valley, Oklahoma passed away at home on February 26, 2022, at the age of 84 after a brief illness. Bill was born in St. Louis, OK on October 6, 1937, to Grady and Pauline Hamby. He grew up in Sulphur, OK. He became a Christian and was baptized in First Baptist Church Sulphur. He graduated from Sulphur High School in 1955. After high school he worked for OG&E for 2 years. Bill met and married, the love of his life, Carolyn Gray in Davis, OK. They were married on February 28, 1959, in the First Baptist Church of Pauls Valley. Bill and Carolyn moved to Oklahoma City where Bill attended the University of Oklahoma. He graduated in 1963 and coached basketball at Taft Junior High for one year. During the time he coached he worked nights cleaning the shop for Sperry-Sun. They offered him a fulltime position with their company. He became district manager and later regional manager. Bill and Carolyn were blessed with two children Gina Beth and William Bart. Bill was transferred to Odessa, TX; Ventura, CA; and Missouri City, TX where they lived for 22 years. While in Missouri City Bill and Carolyn met lifelong friends Ernie and Sue Morris and Don and Gail Keasler. Bill worked for Scientific Drilling and his supervisor, Gene Durocher, remained a very special friend. Bill and Carolyn moved to Pauls Valley, OK in 1993 and Bill retired in 1998. One of Bill and Carolyn’s favorite hobbies was to watch the Sooner games and eat pizza. He was an avid golfer and loved spending time with his children and grandchildren. Bill is survived by his wife of 63 years, Carolyn; his daughter and son-n-law Gina and James Allen of Katy, TX; his granddaughters Tori and Morgan Allen of Katy, TX; his grandsons Gage, Ethan, and Caleb Hamby of Boerne, TX. Sister-n-law Vicki Gray Kirby and husband Bob of Pauls Valley, OK; niece Tara Kirby and son Zackry of Edmond, OK. He is preceded in death by Grady and Pauline Hamby, his son Bart Hamby and nephew Jason Kirby. Cremation arrangements are under the direction of Wooster Funeral Home. Condolences may be sent to the family at www.woosterfuneralhomes.com.

Billy Don Hamby of Pauls Valley, Oklahoma passed away at home on February 26, 2022, at the age of 84 after a brief illness. Bill was born in St. Louis, OK on October 6, 1937, to Grady and Pauline Hamby. He grew up in Sulphur, OK. He became... View Obituary & Service Information

The family of Billy Don Hamby created this Life Tributes page to make it easy to share your memories.