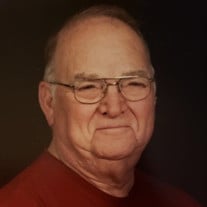 William Everett “Bill” Tyler of Elmore City, Oklahoma was born to Charlie and Helen (Miller) Tyler on September 3, 1942 in Odessa, Texas and passed from this life on April 3, 2020 in Ada, Oklahoma at the age of 77 years. Bill grew up moving between West Texas and Arizona. He helped his dad pick cotton. Bill loved playing basketball, but baseball was his favorite. Bill served his country in the U. S. Navy during the Vietnam War. Bill always said he wished he would of made a career out of being in the Navy. He graduated from the University of North Texas with bachelor’s degree in business administration. On November 6, 1963, he married Reina Mae in San Jose, California. He was a buyer/planner for companies. Bill retired from Weber Aircraft in 2012. He was a member of the First Baptist Church in Elmore City. Bill spent his days watching OU softball and football. The greatest enjoyment for Bill came from watching his grandkids grow up, and watching and coaching them from the stands in any sport they participated in. The highlight of his life were the 43 years he spent with his wife. Bill was a coach, not just for sports, he coached many with his years of experience. He coached us all to be the best that we can be. Mr. Tyler is survived by: Sons: Glenn Tyler and wife Tanya of Fairview, Oklahoma Eric “Boo” Tyler of Irwin, Pennsylvania Daughters: Donna “D.D.” Tyler of Bethany, Oklahoma Cheryl Tyler of Bethany, Oklahoma Lacey Turner and husband Dan of Elmore City, Oklahoma Brothers: Robert Tyler and wife Molly of St. Petersburg, Florida Wesley Tyler of Krum, Texas Sister: Ann Donahue of Kansas City, Missouri 10 grandchildren: Mandy and husband Robert Robinson; Vicki, Sarah, and Savannah Tyler; Erica and E J Tyler; Kaden Crawford; Jesse, Rei and Quinton Turner 3 great-grandchildren: Joslin Turner, Jaythan and Rose Tyler Mr. Tyler was preceded in death by: His wife: Reina Mae Parents: Charlie and Helen Tyler Sister: Charlene Norris

The family of Bill Tyler created this Life Tributes page to make it easy to share your memories.