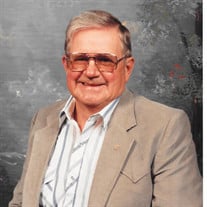 William F. “Bill” Freeman, Jr. of Maysville, Oklahoma was born to William F. and Elsie (Johnson) Freeman, Sr. on October 28, 1925 in Bridgeport, Connecticut and passed from this life on August 10, 2019 at his home in Maysville at the age of 93 years. Bill grew up and attended school in Stratford, Connecticut. He served his country in the U. S. Navy during WW II. Bill drove the Higgins Boat to deliver troops to Omaha Beach on D Day. He made the first trip and at least 6 more. After his honorable service, Bill worked for Southern New England Telephone as a building maintenance supervisor, retiring in 1984. Bill wanted to find a warmer place to live and friendlier atmosphere and found it right here in Oklahoma. In 2003, Bill and Gay Templeton were married and made their home in Antioch and later Maysville. He was a member of the First United Methodist Church in Maysville, a 32nd degree Mason, American Legion, and National VFW. In his spare time, Bill enjoyed working outdoors, going to senior dances and traveling. Mr. Freeman is survived by: His wife: Gay of the home Stepson: Mark Hyde and wife Lucille of Nicoma Park, Oklahoma Stepdaughter: Kathy Massey and husband Joseph Warfield of Oklahoma City, Oklahoma 4 grandchildren, 8 great-grandchildren, 2 step-grandchildren and 1 step-grandchild Mr. Freeman was preceded in death by: His 1st and 2nd wives: Helen and Nadine Daughter: Cynthia Freeman Son: William Freeman III Parents: William and Elsie Freeman, Sr. Brother: Walter Freeman Sister: Valerie Stien A celebration of Bill’s life will be held 10:00 a.m., Wednesday, August 14, 2019 at the First United Methodist Church in Maysville, Oklahoma with Rev. Mike Deviney officiating. Interment will be in the Antioch Cemetery under the direction of Wooster Funeral Home. You may send a condolence to the family at www.woosterfuneralhomes.com.

The family of Bill Freeman created this Life Tributes page to make it easy to share your memories.