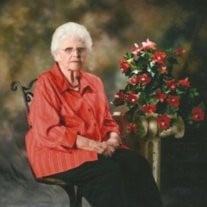 Beulah Beatrice McCaskill was born July 9, 1914, near Antioch, Oklahoma and died March 1, 2013, a resident of Antioch. She was the only child of James Albert Collins (Jim) and Ova Melinda (King) Collins (Ova). Because she was born prematurely, she was a small child and the nickname, “Dinky,” given to her by one of her father’s farmhands, later shortened to “Dink”, stuck with her throughout her life. Dink married Boochie Emitt McCaskill on April 25, 1929. During the tough times of depression, World War II, and the Korean conflict, they had 10 children, Bonnie, Bobby, Blanche, Jimmy, Patsy, Ronnie, Sam, Geary, Donnie, and Linda. They had their first grandchild in 1947 and the little place in Antioch was bustling with children, grandchildren, and their friends. Boochie and Dink farmed, raised cattle, pigs and sheep, and even ran a store. They did odd jobs and anything else they could or needed to do to raise their children and make sure they each had the proper dress or suit for high school graduation. Dink often said, “We can’t change it, so we’ll just have to do the best we can.” That philosophy allowed her to deal with hard times and Boochie’s untimely death when she was just 58, and the loss of several children, grandchildren, and great grandchildren she dearly loved. Dink was a comfort and a rock for all who knew her. Everything else could change, but Dink would still be there at that little house in Antioch. She had 32 grandchildren, 72 great-grandchildren, 51 great-great grandchildren, and one great-great-great-grandchild who each thought they were her favorite. That was her way. She was preceded in death by her parents, her husband, daughters Bonnie Gilmore and Blanche Cox, and sons Donald (Donnie), Bobby, Ronnie, and Jimmy. She is also preceded in death by 2 grandchildren, 7 great-grandchildren and 1 great-great grandchild. She is survived by Daughters Patricia Frost of Kansas City, Kansas and Linda McCurley of Elmore City, Oklahoma and sons Sam and wife Alene of Tuttle, Oklahoma and Geary and wife Terry of Woodward, Oklahoma, daughters-in-law Wanda McCaskill of Elmore City, Oklahoma and Carol McCaskill of Marlow, Oklahoma. Also 6 generations of family and friends. Funeral services are scheduled for Monday, March 4, 2013 at 2:00 p.m. in the Abundant Love Fellowship Church in Maysville, Oklahoma with Rev. Danny Gamble officiating. Interment will be in the Antioch Cemetery under the direction of Wooster Funeral Home. You may send a condolence to the family at www.woosterfuneralhomes.com

Beulah Beatrice McCaskill was born July 9, 1914, near Antioch, Oklahoma and died March 1, 2013, a resident of Antioch. She was the only child of James Albert Collins (Jim) and Ova Melinda (King) Collins (Ova). Because she was born prematurely,... View Obituary & Service Information

The family of Beulah "Dink" Beatrice McCaskill created this Life Tributes page to make it easy to share your memories.