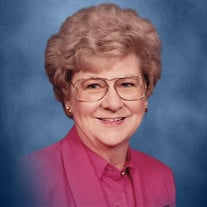 Betty Montgomery Murray, 96 passed away April 15, 2019. Betty was born October 20, 1922 in Vinita, Oklahoma to T. C. and Pearl Scott Montgomery. She graduated from Vinita High School and Oklahoma A & M (now Oklahoma State University) with an Associate Degree. She and Glen were married on April 27, 1947 and they celebrated their 71st wedding anniversary last year. They lived in Vinita until 1952 and then moved to Pauls Valley. Betty was a stay at home mom and raised two boys. Betty took pride in always having homemade cookies and milk ready for the boys when they came home from school. Betty also served as a Cub Scout den mother for two years. When the boys were old enough to behave, she took a job as secretary at the First United Methodist Church where she worked for 27 years. Betty served in a number of volunteer jobs, she was Treasurer of the Garvin County Red Cross Chapter, member of the Samaritan Board, American Legion Auxiliary past president, and the Pauls Valley Hospital Auxiliary. Betty is predeceased by her mother and father, a brother H. L. (Hump) Montgomery of Vinita, a sister Bernice Montgomery Williams of Vinita, three nephews John Montgomery of Edmond, Don Montgomery of Vinita and Tom Montgomery of Vinita. She is survived by her husband Glen Murray of Norman, son Don (Dianne) Murray of Stillwater, son Richard Murray of Norman, grandchildren Chase Murray (Julie) of Buffalo, NY and Skye Sandell (Jon) of Guthrie, and great-granddaughter Stella Murray of Buffalo, NY, great-grandson Clay Sandell of Guthrie, and one niece Beverly Williams Lawson of Vinita. Funeral services are scheduled for 2:00 p.m., Thursday, April 18, 2019 at the First United Methodist Church in Pauls Valley, Oklahoma with Rev. Don Griffin officiating. Interment will be in the Mt. Olivet Cemetery under the direction of Wooster Funeral Home. The family requests memorials be made to First United Methodist Church, 401 Willow St. P.O. Box 385, Pauls Valley, Ok, 73075. You may send a condolence to the family at www.woosterfuneralhomes.com.

The family of Betty Murray created this Life Tributes page to make it easy to share your memories.