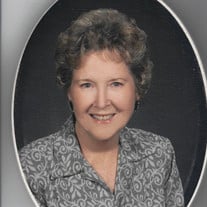 Betty Louise Harper was born on January 14, 1928 in Earlsboro, Oklahoma to Johnnie and Charlie Holland. She passed this life at home on August 11, 2017. As a child, Betty's father was a tool pusher, and they lived in many towns throughout Oklahoma and western Texas. In 1945 her family settled in Maysville, Oklahoma where she graduated from high school. Immediately after high school, she attended Cooke County Junior College in Gainesville, Texas. Betty worked during the summer at Narramore Welding in Maysville. While working there she met her lifelong partner Virgil Harper. Betty invited Virgil to a Sunday school party for their first date. She graduated in May, 1951 with a Bachelor of Science degree in music education from the Oklahoma College for Women in Chickasha. In the fall of 1951, Betty became the high school vocal teacher at Putnam City High School. In the spring 1952 Virgil proposed to Betty and they married on June 29, 1952 in the First Baptist Church in Maysville. In July of that same year, they moved to Pauls Valley and she began a 40 year teaching career in the Pauls Valley schools. She taught elementary music at Lee School and gave the gift of music to generations of Pauls Valley students. Betty provided an amazing curriculum of classical, sacred, folk and seasonal music. Many students today remember such favorites as Peer Gynt Suites, Nutcracker Suite, Night on Bald Mountain, and of course, square dancing on Fridays. In 1954 Betty received her master's degree in elementary education from the University of Oklahoma and later received a master's degree in guidance and counseling. She was the first elementary counselor in Pauls Valley Schools and continued that position until her retirement. In 1985 Betty earned the honor of being a National Certified Counselor and was the President of the Oklahoma Schools' Counselor Association. Jay, her only child, was born on August 26, 1960. Jay and Debbie were married in 1984. The family continued to grow with the birth of Jay II in 1988 and Elizabeth 1989. Betty retired in 1988 to become a full time Nana. Betty was baptized in 1951 at the First Baptist Church of Maysville. Betty and Virgil joined the First Baptist Church of Pauls Valley in 1952. She was a lifelong member of the church choir, teacher and director of Sunday school classes, Christian training teacher, vacation Bible school leader, Falls Creek sponsor, church bus ministry leader, and worked tirelessly with the visitation committee. Many families recall the first people to reach out to them when they moved to Pauls Valley were Betty and Virgil, who of course invited them to church. Betty was a devoted wife, and loving mother, grandmother, mother-in-law, and a faithful church member. Although she wasn't able to attend church in the later years, it wasn't any less important to her. Betty is survived by her husband, Virgil of 65 years; her son, Jay and his wife Debbie of Pauls Valley; 2 grandchildren, Jay II and his wife Katie of Norman; Elizabeth of Chicago, Illinois; Sister, Maxine Gardner of Norman; Brother, Charles Holland and wife Loretta of Yuma, Arizona; and hosts of nieces and nephews. She was preceded in death of her parents, Johnnie and Charlie Holland; Sister, Doris Ingersoll; and brother, Albert Holland. Services will be held at the First Baptist Church of Pauls Valley on Friday, August 18, 2017 at 2:00 p.m. In lieu of flowers, donations may be made to the First Baptist Church, PO Box 490, Pauls Valley, Oklahoma 73075. Services are under the direction of Wooster Funeral Home. You may send a condolence to the family at www.woosterfuneralhomes.com. Visitation hours will be held on Wednesday, 9:00 a.m. – 4:30 p.m., Thursday, 9:00 a.m. – 7:00 p.m., and Friday, 9:00 a.m. – 12:00 p.m. at Wooster Funeral Home.

Betty Louise Harper was born on January 14, 1928 in Earlsboro, Oklahoma to Johnnie and Charlie Holland. She passed this life at home on August 11, 2017. As a child, Betty's father was a tool pusher, and they lived in many towns... View Obituary & Service Information

The family of Betty Louise Harper created this Life Tributes page to make it easy to share your memories.