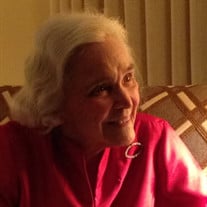 Betty Burns Densmore was born on March 5, 1922, in Pauls Valley, OK and passed from this life at Pauls Valley General Hospital on June 25, 2014 following a stroke. She was the youngest child of Arthur Parsons and Susette Matthews Burns. Pauls Valley was her home for most of her life. She graduated from The Hockaday School, in Dallas, and from Wellesley College. Following school, she worked in Dallas for a start- up company called Delta Airlines. It was at this time that she met Chauncey Densmore. They were married November 29, 1947. At the time of Chauncey's death in 2005, they had been married 58 years. Betty was a lifelong member of the First Presbyterian Church in Pauls Valley, and she was actively involved in church life. She also enjoyed civic projects and served on the Pauls Valley City Council, Main Street and Beautification Boards and was a founder and co- chair of the Pauls Valley Hospital Foundation as well as a long time member of the PVGH Auxiliary. She was an enthusiastic supporter of the Samaritans, PAWS, and the Santa Fe Depot Museum. For years Betty entertained the idea of opening a Mexican restaurant. That idea came to fruition in the form of Tio’s Restaurant, which she, Chauncey, and her brother, John Burns, established 41 years ago. Betty was preceded in death by her parents, her husband, sister and brother- in- law Susanne and Warren Payne, sister- in- law Jean Densmore, brother and sister- in- law, Dana and Jean Densmore. She is survived by her brother, John H. Burns; daughter, Marsha Densmore and son, Arthur Burns Densmore, grandchildren Chauncey Matthews Venable; John Lowell Venable and his wife Stevi and their children Jack and Mali; Stuart Marshall Densmore; Thomas Arthur Vaughn, Karina, and their daughter, Olivia; Ellen Densmore Vieira and her husband Antone, and their children, Ellis and Portia; nieces Susan Wilson and Sarah Johnston, and many other relatives. A memorial service will be held at the First Presbyterian Church of Pauls Valley on Saturday, June 28 at 2:00 in the afternoon. Services and arrangements are under the direction of Wooster Funeral Home. In lieu of flowers, the family prefers memorials to any of Betty's favorite local organizations. You may send a condolence to the family at www.woosterfuneralhomes.com

Betty Burns Densmore was born on March 5, 1922, in Pauls Valley, OK and passed from this life at Pauls Valley General Hospital on June 25, 2014 following a stroke. She was the youngest child of Arthur Parsons and Susette Matthews Burns.... View Obituary & Service Information

The family of Betty B. Densmore created this Life Tributes page to make it easy to share your memories.